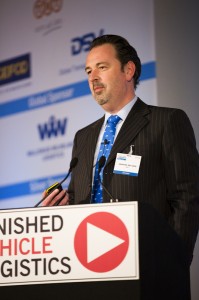 British construction equipment manufacturer, JCB, has moved aggressively towards reducing emissions and fuel consumption in its supply chain, including the use of a dual-fuel carrier fleet and multimodal logistics. The company is already savings hundreds of thousands of pounds per year as a result, according to Joannes Van Osta (pictured), general manager of logistics.

Van Osta, speaking at the Automotive Logistics Europe conference, revealed that a project with its UK carrier, Brit European, to develop a fleet of dual-fuel trucks using compressed natural gas and diesel was making important headway. The dual-fuel equipment now makes up 22 out of the 32 trucks that are serving JCB in the UK. This equipment, which has been partly funded by a government grant, carries JCB livery and represent the only dual-fuel high-and-heavy fleet in Europe, according to Van Osta.

“We have already seen savings of 16% in CO2 emissions, compared to our goal of 18%,” he told delegates. “This is savings us hundred of thousands of pounds per year.”

Brit European is JCB’s sole carrier in the UK, the manufacturer’s home market. The carrier moves vehicles both for domestic distribution as well as to ports fro export from JCB’s manufacturing base in the Midlands.

Van Osta said that challenges have included a shortage of CNG fuelling stations; Brit European currently uses a fuelling facility adjacent to the A50 motorway in Foston. “It is a challenge, as such fuelling stations are not always available in the UK or Europe. But we make it work,” he said. “We drive the growth of the network of fuelling stations by taking initiatives.”

Van Osta added that the company has also recently added a number of multimodal routes to its network. This includes a ro-ro route from the UK to Algeria operated by Flota Suardiaz, a flow that had previously moved by road to Marseilles in the south of France before moving by ferry. “That was not cost or environmentally sustainable. We convinced Flota Suardiaz to set up the new service,” he said.

The company has also recently introduced a multimodal route to Poland from the UK. Furthermore, it is containerising more vehicles for shipments to Asia, particularly on return routes from inbound material shipments. “We are containerising more machines than ever before and take advantage of incoming material from the Far East, sending vehicles on the way back,” he said.

Van Osta pointed to other green initiatives, including a high use of renewable energy at its new logistics part centre in the UK, as well as a push to reduce the fuel consumption of its own equipment. “We believe that if an investment is good for the environment, nine out of ten times it will be good for your bottom line as well,” he said.

Van Osta called on service providers to develop better tools to provide load visibility across the supply chain, particularly for where they may be empty backhaul opportunities. “There are freight exchange tools on the market, but they are currently limited,” he said. “There are opportunities to give us more visibility, which would allow the industry to save cost and emissions.”