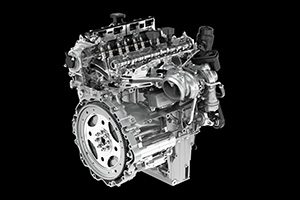 Jaguar Land Rover (JLR) has confirmed it will bring a long-standing agreement with Ford for the supply of six- and eight-cylinder petrol engines from the latter’s plant in Bridgend, Wales, to an end in 2020.

In a statement, JLR said: “In line with its contractual agreement established in 2008, Jaguar Land Rover has served the required three years' notice to Ford Motor Company for the supply of six- and eight-cylinder petrol engines from its Bridgend manufacturing plant.

“Ford has been and remains an important strategic supplier to Jaguar Land Rover under an agreement which was negotiated to support our business until the end of the decade.”

In its own statement, Ford said: “While we do not discuss the details of our contractual arrangements, we have informed our unions that Jaguar Land Rover intends to end our petrol engine supply arrangement slightly earlier than expected in late 2020. Given our long-established and successful relationship in the delivery of world-class engines, this is disappointing news for the Ford Bridgend Engine Plant. However, as the auto industry is undergoing rapid change, we continue to look at other high technology opportunities for Bridgend in the future.”

A spokeswoman for Ford told Automotive Logistics that around 50% of the 1,765 employees at Bridgend worked exclusively on JLR activity but that it was too early to discuss the potential for redundancies. “We are not talking about any redundancies – the plant remains full for the next 2-3 years and there are work streams to examine future business opportunities for the plant,” she confirmed.

Asked if the supply of six- and eight-litre petrol engines would switch to JLR’s own Engine Manufacturing Centre in Wolverhampton – which it opened in 2014 and announced plans to double the capacity of in November 2015 – a spokeswoman for JLR said it was “making no statement on the future sourcing of these engines at this time”.

JLR’s Engine Manufacturing Centre is home to its low emission Ingenium engine (pictured), which is fitted in a range of models and supplied to all three JLR vehicle plants in the UK.

In July, meanwhile, JLR also opened its first overseas engine plant in Changshu, China, as part of its joint venture with local car company Chery. The Changshu plant is initially building the new Ingenium 2.0-litre, four-cylinder engine at a rate of 130,000 units a year.