Kia Motors has started processing vehicles through its new UK facility at Stallingborough near the port of Immingham on the north-east coast, managed by transport and logistics provider Paragon Automotive. 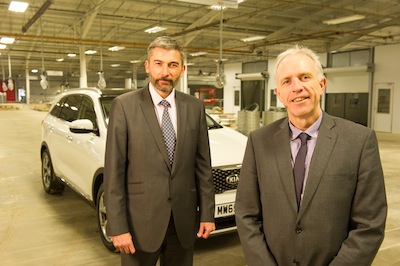 The start of operations follows the signing of a £115m ($176.5m) 10-year deal last year that will see Paragon receive, store and provide value-added services such as pre-delivery inspection and paint repairs. The facility, which represents a total investment of £20m, will be fully operational by mid-February this year.

The 35-hectare facility is exclusively handling all Kia imports for distribution to 185 dealers across the UK from South Korea and from its plant in Zilina, Slovakia, all of which arrive through the nearby port of Immingham. Currently that amounts to 80,000 vehicles (plus 8,000 remarketed vehicles), but Kia is aiming to raise sales to more than 100,000 by 2020.

Immingham port is able to berth both 7,000-unit deep ocean vessels and the DFDS short-sea vessels that bring Slovakian made cars, which are first taken by rail to the German port of Cuxhaven prior to export to the UK.

Kia was previously using GBA’s processing facility at Killingholme, but the carmaker’s goals for expansion were compromised by the available capacity at that site according to its (now outgoing) commercial director in the UK, Yaser Shabsogh.

“GBA is a great partner and they continue to do our deliveries,” said Shabsogh at this week’s press launch for the new facility. “[However], GBA’s site was constrained and while there was potential for growth in the future it wasn’t that clear. [Paragon’s Stallingborough] facility is much clearer and certain in terms of growth.”

More specifically, the site has scope for more than 16 hectares of vehicle storage. Kia has targets to increase volumes by 150% over the full term of the contract. Paragon has been developing the site since it started operations there in 2005.

However, it was not just available space that convinced Kia to sign the 10-year contract with Paragon, which includes separate agreements for new vehicles and for remarketing services, the latter area being one that Paragon is growing.

“[Paragon] has got a very healthy track record and it has really good people who have shown success operating this kind of thing for bigger operations,” noted Shabsogh. “They have also shown success at bringing best-in-class and new technology to operations, including with the RFID tracking, the first time anyone is doing this in the UK.”

That recommendation refers to the tracking technology that Paragon has developed in-house and is implementing at the site, which uses RFID tags on each vehicle and registers their location and status remotely via a gate reader on entry to the facility. It is a technology that the company will be rolling out to its other sites in the UK.

“It will help us have more visibility of vehicles going through the processes, to identify sold vehicles from stock vehicles,” explained Mark Hindley, Paragon’s group sales and marketing director. “Traditionally, some vehicles get worked and then go into storage without a customer. It would make more sense to work those first that do have a customer.”

Paragon also offers the latest pre-delivery inspection and paintless repair technology, while also including paint shops in the instance that vehicle do have to be recoated.

Paragon is active across a number of ports and facilities in the UK, including an expanded portfolio after it acquired the vehicle processing and preparation of what was then Eddie Stobart in 2013.

Benefits of a long-term view
Development of capacity and innovation in technology for its customer were the driving forces behind the development of the Stallingborough site and the reason Kia opted for Paragon on such a long-term contract, according to Mark Hindley.

“The main point was bringing innovation to the process,” he said. “To do that we had to look at two things. One was the vehicle processing capability and capacity. And the second thing was vehicle storage capacity. We came to the conclusion that this was a great area to invest in because you’ve got the availability of land and labour. Plus, with our improving technology we could also deploy the latest technology to make the processing of vehicles more efficient.

Paragon worked with Kia during the tender process, according to Hindley. Kia published clear information setting out vehicle forecast for five years, including new and used vehicles, along with KPIs, which was followed by follow up and clarification from Paragon. 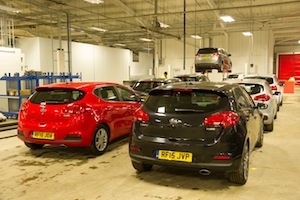 The facility is also strategically located central to Kia’s network of dealers, something the carmaker said is important to its emphasis on lead mileage, and is close to all major road and rail transport links.

“We are in the UK to grow, to stay and to build a really successful operations,” said Shabsogh. “We have gone from 30,000 [sales] seven years ago to 80,000 this year and we definitely want to be 100,000-plus going forward. So why would we not commit to a long term relationship with the right partner, particularly a relationship on a site that is geared for growth.”

New role for Shabsogh
It was announced this week that Yaser Shabsogh is leaving his role as commercial director of Kia Motors UK at the end of the month to take up a new role at sister company Hyundai in the Middle East as managing director of Almajdouie Hyundai, the distributor in eastern Saudi Arabia. Shabsogh will be based in Damamm. He will be replaced by Kia Motors UK’s current business development director, Simon Hetherington.

“Of course we are very sad to say goodbye to Yaser, but we understand his desire to take up a new challenge and given that he was born in Riyadh we also recognise that he has strong family ties to the Middle East,” said Paul Philpott, president and CEO of the division. “Ever since he joined us from Ford he has brought energy, commitment and good humour to our sales and commercial operations and I wish him only success in the future.”