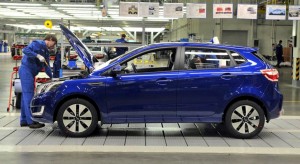 Kia Motors has said it will begin to export vehicles from its Russian facility in St Petersburg to surrounding states, in an effort to offset falling sales and the effects of the depreciated Russian currency on the domestic market.

Kia models roll off the line at Hyundai Motor's factory in St Petersburg, which manufactures both brands.

The company said the move was connected to the sharp fall in the companyís profitability at the end of last year.

After a lengthy analysis of the falling profits, experts at the company agreed that some of those cars previously going directly to Russia can be exported to other countries, a spokesperson for the company said. The company's decision was also based on the fact that Kia's production has dropped sharply in Russia.

Russian business analysts have said that similar decisions are likely to be taken by other foreign carmakers based in Russia.

"The idea is perfect, given the fact that the cost of production in Russia has also dropped," said Michael Ganelin, senior analyst of Gazprombank. "The assembly of Kia is located in St. Petersburg, so the company can launch exports to Eastern Europe and the Baltic States with appropriate logistics spends."

That point was reiterated by a spokesperson from analyst firm Finam Vladislav Isaev. "Cars produced in Russia by locally based companies can be redirected to other markets," he said. "On the one hand this is because of the fall in domestic demand here, and on the other because of the fall of the Russian rouble against the dollar and euro, [meaning] the cost of production processes here [in Russia] may be lower than in other neighbouring regions. Some companies have already announced that they will increase the level of localisation of [vehicles and parts] in such a situation."

The spokesperson also added that the same scheme may be of benefit for Russian divisions of Volkswagen and Renault-Nissan. There are rumours that Hyundai and Toyota could redirect supplies from the Russian market to Eastern Europe given the hit they have taken in Russia. For instance, in the fourth quarter of last year Hyundai profits in the country dropped by 19% year-on-year.

That said, not all foreign carmakers in Russia are looking at exports as a coping strategy. General Motors, for example, has decided to put production in Russia on hold from the middle of March to the middle of May this year.