Largest vessel ever calls at Malaga with spot shipment from Tarragona 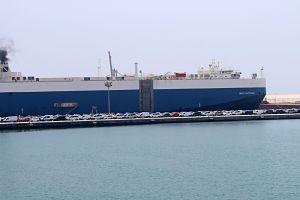 The NOCC Kattegat, operated under charter by Neptune Lines, has become the largest vessel to call at the Spanish port of Malaga after delivering a spot shipment of vehicles there from Tarragona in late July.

The vessel, which is 196.4 metres long and has a 5,253-vehicle capacity, discharged 600 Hyundai and Kia cars at Quay 7 in the last week of July. The shipment was handled by Berge, which is represented in Malaga by the Condeminas shipping agency.

Neptune Lines runs two regular services to Malaga – one from Romania and Turkey via France, and the other from Morocco. It has only ever undertaken spot shipments to Malaga from Tarragona and no regular services are planned, a spokesman for Neptune Lines told Automotive Logistics. Further spot shipments between the two Spanish ports could now take place, however, "if the opportunity presents itself", he added.