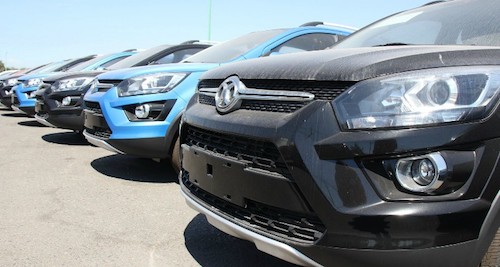 The Mexican Pacific Coast port of Lázaro Cárdenas took delivery of a major consignment of over 550 imported BAIC finished vehicles at the end of March.

The port handled its first-ever shipment of vehicles on behalf of the Chinese state-owned enterprise in March last year, when it imported 163 D20s that were destined for dealers in Mexico City.

The first vehicle was sold in Mexico City in July last year.

BAIC traffic through Lázaro Cárdenas in 2016 amounted to more than 1,000 units, according to statistics from the Ministry of Transport and Communications.

Mexico has not only imported several batches of D20s, but also various SUV X25 vans, which have been distributed to dealers in Guerrero, Morelos, Querétaro, Mexico City and Mexico City State from the west coast port.

The carmaker is reported to be targeting the sale of 5,000 vehicles in the country by 2018 and plans to build an assembly facility in Mexico. While Chinese carmakers have promised to build assembly plants there in the past, interest among Chinese carmakers in the Mexican market is on the up and seems to be making a true assembly footprint more likely.

The prospect of closer cooperation between China and Mexico in terms of parts and vehicle trade is also more likely, given discussions at this year’s Automotive Logistics Mexico conference in Mexico City.

A number of logistics providers at the conference stressed the prospects for a closer relationship, including Gefco and China’s CDC International Logistics.

Car handling growth in Mexican portsLázaro Cárdenas is making great strides in its aim to become one of Mexico’s leading vehicle handling ports. In January 2016, throughput amounted to more than 22,000 units, rising by almost 24% to 27,315 units in January this year.