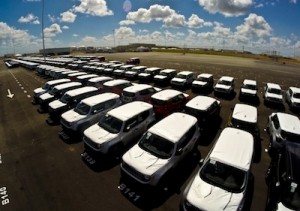 Despite years of growth leading up to the current downturn, Brazil faces weaknesses in its tier supply chain following chronic underinvestment in equipment, tooling and logistics. High labour costs and stifling bureaucracy have also made imported parts more attractive than local ones in some cases despite customs issues and logistics costs. These perennial inefficiencies are also hindering export competitiveness from Brazil – despite the significant fall in the value of the real versus the dollar and other currencies.

That was the analysis of a number of executives speaking at the Automotive Logistics South America conference in São Paulo. Jansen Esteves, director, global supply chain director for South America at tier one Delphi, outlined weaknesses in the lower tier supply base, including tier two and tier three suppliers, which currently account for just 25% of revenue compared to 75% for tier ones. Now, with the decreases in vehicle assembly – light vehicles are down more than 20% year-on-year – it is becoming more difficult to accumulate economies of scale across Brazil’s fractured manufacturing base. Overall, he suggested that the country has not kept up with global capabilities across vehicle platforms.

“With 21 OEMs installed in Brazil, it makes it even more difficult to gain scale in such a fragmented market,” said Esteves.

Orlando Moral, operations director for Chery Brazil, which launched a plant in Brazil last year, also confirmed that it could be difficult to localise some parts compared to sourcing them in China because of the current low scale of the carmaker’s production in Brazil and the cost of new tooling. Chery is currently about 30% localised in Brazil (link to story).

Delphi itself has a relatively high localisation rate for some parts, such as its powertrain systems in Brazil. The company has a fairly dense and complex supply base in Brazil, particularly in São Paulo state, as well as further north in Belo Horizonte, and south of São Paulo in Curitiba. Esteves said that Delphi tries to ensure that all of its suppliers are no further than 24 hours from its plants to increase transparency and reduce inventory. However, despite attempts to localise, companies always have to import something. Some products, such as electronics and electrical architectures, are dominated by Asia, for example.

Esteves explained that Delphi has global purchasing requirements that seek strong, global suppliers with the best technology and excellent quality and delivery. In a complex analysis, international supplier locations can be more effective despite import costs and fees for some product. That is why Delphi has integrated its global sourcing with domestic supply and logistics in Brazil.

Not competitive enough
Esteves said that, with the fall in the real, Delphi has plans to export products from Brazil, but products and supply chains can rarely be adjusted to meet global demands and requirements overnight. Though some manufacturers, such as truckmaker Scania, have been able to divert to exports quickly, for most manufacturers it takes time.

Esteves added that while Brazil is reasonably strong in plastic and injection moulding, and is rich in commodities, it is uncompetitive for high value and labour-intensive areas of manufacturing. Labour costs have grown over inflation, for example, while the country has high taxes, poor logistics and high bureaucracy costs. All of that has made it more difficult to make a business case feasible for localisation or exports.

Both Moral and Esteves pointed out that Brazil’s Inovar-Auto incentive programme, which was supposed to encourage local investment and supply chain development, has not had the desired effect, in part because of complex bureaucracy. “It would arguably be better for the supply chain and local production to have a more open trading system than to put so many limits on trade here in Brazil,” said Moral.

Esteves added that Brazilian automotive manufacturing has fallen behind its international peers in technology and equipment. The average age of machinery in Brazil is around 20 years old, he said, compared to Germany, which is five years old. “We forget to invest in technology in Brazil and there is no way to be competitive,” Esteves said.

A lack of investment and reform by the government and others across infrastructure and other areas is also holding the country back. “I think Brazil has lost its chance in some ways. We’ve had no investment in infrastructure, low investment in airports… in logistics Brazil is not doing what it should,” he said.

Rather than putting more restrictions on trade, Esteves called for tax and labour reforms, and for the government to try to cut more red tape. In many ways, he said, the current crisis was self-induced.

“Brazil is a large market, and people wonder how we can be in a crisis in a country with so many natural resources,” he said. “But Brazil doesn’t move on. We have to have tax and labour reforms, and without this Brazil will continue slipping, but won’t have an economy that can compete with the largest countries in the world.”