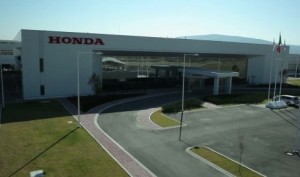 Honda has reportedly faced issues with production at its new Celaya plant in Mexico because of problems affecting both the quality and supply of parts. A consultant speaking to Automotive News has also cited vandalism and hijacking for finished vehicle rail shipments as an issue.

According to US Honda dealers in the article, the delays in the delivery of the HR-V follow similar delays that affected the rollout of the Fit last year, which was two months late, and continues to be hampered by delays and stolen parts. Ron Harbour, a partner at consulting firm Olivery Wyman also pointed to shortages in skilled labour and rail transport. “Railcars do get hijacked. You need to hire guards for the trains,” he told Automotive News.

Cargo theft and damage incidents are high in Mexico, as was made clear by executives at the Finished Vehicle Logistics conference in California held earlier this year. Sources at American Honda admitted then that the company’s very first rail shipment out of its plant in Celaya was hit by vandalism.

According to Automotive News, there were also delays to deliveries of the Fit because the cars had to be repaired following parts being stolen from them while in transit in Mexico.

Honda officials have downplayed the logistics and quality issues, with a spokesperson saying that the company was evaluating the shipping process to seek improvements. He also pointed to significant increases in dealer deliveries through the summer, including record sales in September.

Dennis Manns, vice-president of logistics and sales planning, also toned the concerns down: "We continue to make steady progress with all aspects of our Mexico business," he told Automotive Logistics. "The car is doing great in the marketplace."

The Celaya plant relies heavily on rail transport, shipping vehicles to ports as well as directly to the US for export. The plant is also the site of an intermodal rail hub, while Mexican railway providers Ferromex and Kansas City Southern de Mexico, together with government, are building a new rail interchange near to the plant.

In an interview earlier this year with Automotive Logistics, Alberto Sanchez, commercial director for automotive at Ferromex, admitted that theft and vandalism were a reality for logistics providers in Mexico. In response, Ferromex has designed special locks for wagons that are only used in Mexico.

“We also have 2,200 guards and deploy them in the most unsafe places,” he told Automotive Logistics.

Honda is not alone in its problems with vandalism. As outlined in the extensive coverage of the Mexican market in the July-September issue of Finished Vehicle Logistics magazine, Fiat Chrysler has also experienced problems at Cuautitlan, near Mexico City, and Irapuato, just west of Celaya. The carmaker has established CCTV in Cuautitlan, while in Irapuato is working with the federal police to establish patrols of its vehicles, both of which have increased security.

Nissan has also seen a drop in incidents since it began targeting specific areas. An executive told Automotive Logistics that it has addressed the issue by working together with carriers and rail companies.

It also common in Mexico for contracts between carmakers and road providers to mandate specific routes, with authorised places to stop. If drivers follow the rules, insurance policies will at least cover most incidents that occur. If they don’t, then carriers are responsible for damaged or missing cargo.

Rail issues in Mexico will be among the wide-ranging topics discussed at the inaugural Automotive Logistics Mexico conference which will take place in Mexico City between the 27-29 January next year.