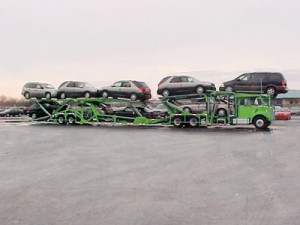 Car carrier equipment maker Lohr Automotive is restructuring its business in North America. Operating through the Delavan brand, which it purchased in 1998, the company is terminating its 50:50 joint venture with Miller Industries, which it set up two years ago, and concentrating its main assembly activity for the region at its facility in Tezoyuca, Mexico, which it set up in 1997. Full independent production will begin at the end of March. The move is expected to give the company greater leverage on pricing.

“Now we are going to be producing car carriers to service all of North America out of Mexico,” said Eric Belton, Lohr Automotive’s managing director, speaking on the sidelines of the Automotive Logistics Europe conference in Bonn. “The trailers will be assembled for delivery to a leased facility in Atlanta, Georgia where the head racks will be fitted.”

The car carrying equipment is made of two main parts, the trailer and the head rack on the tractor body.

Activity in Mexico and at the Atlanta assembly facility in the US will be headed by Robert Ferrell, previously executive vice president of Fleet and Maintenance at Allied Automotive Group. Ferrell, who chose not to move over to Jack Cooper when it bought Allied, is a veteran of the car carrier business and Allied was a former customer of Delavan’s. Belton said Farrell was already in the role and was currently finalising the lease agreement for the Atlanta facility. Lohr is transferring the staff involved in the Miller joint venture to the new outfit and will be adding engineering experts from the parent company.

Belton went on to say that the market in North America was booming and that Delavan was going to work on growing its business, with full backing by Lohr. The market is dominated by US equipment maker Cottrell but Belton said that targeting 20% of the North American market is its aim.

“Delavan is marginal at this stage but we are intending to grow the business. I think if we get 20% of the market we will be happy because that is a big number,” he said, adding that it would be pretentious to state bigger claims given the early stage of the restructured business.

Miller will now return to concentrate on its core business of producing recovery vehicles or ‘wreckers’ – the trucks used to pick up illegally parked vehicles – but the companies will continue to do business together.

“We have a long-term relationship with Miller which involves the exchange components,” explained Belton. “We used to own a wrecker manufacturing company in Europe and Miller purchased that from us 20 years ago. We remain in very good contact and we are purchasing some components from them.”

He said that Miller had decided to pull out of the car carrier joint venture because it turned out to be too much at variance with its core competency.

“Three months ago Miller decided that the business was not matching its core skills and capabilities so they decided it would be better to get out of the venture.”

Miller will continue to operate at the Tennessee facility it shared with Delavan. The facility in Buffalo has been closed for some time.

At the same time, however, Lohr used this week’s Automotive Logistics Europe conference to announce another joint venture, this time on a global basis, with Convertible Trailer Manufacturing Worldwide (CTM WW).

“We have entered into a joint venture agreement with them to cover the world. What we are bringing to the equation is that, once we have developed the resources for engineering we will bring our knowledge of all the car carrier markets around the world,” said Belton. “We will also bring our manufacturing capabilities, as we have seven factories globally, and a good knowledge of the global customer base.”