General Motors’ former Group Vice President for Global Purchasing and Supply Chain, Bo Andersson, who resigned in a surprise move last Friday to become Chairman of Russian carmaker GAZ, leaves behind a legacy of aggressive monitoring and cost cutting throughout the supply chain at GM.

Among the areas Bo Andersson put the most emphasis on was logistics and supply chain management – he oversaw the dismantling of Vector SCM in 2007, the carmaker’s outsourced, 4PL experiment, bringing logistics control back in-house to the carmaker. 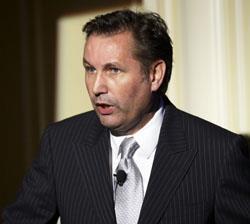 Andersson has played an instrumental role both in the globalisation of GM’s supplier base, as well as its consolidation as GM shrinks production in North America. A former officer in the Swedish army, he had a reputation for creating an extremely competitive environment, but also for being tough on suppliers; there were some who found his management style abrasive.
However, Andersson’s task was never an easy one. He controlled an annual budget of $87 billion (including as much as $7 billion for logistics), from which he managed to shave $2 billion annually from the parts bill. Recently, as GM bled cash toward bankruptcy, he’s had to face the elimination of 30% of GM’s supply base in North America.
For logistics service providers, Andersson was seen as a champion for logistics’ importance. According to an executive at one major 3PL, Andersson had a high appreciation for the value of good logistics.
“Tough but fair,” was how Greg May, President of Jack Cooper Transport, a car haulier for GM, described him. “Bo knew how to strike a balance between GM’s economic needs and the stability of suppliers. For hauliers especially, who have had a very tough time, he enabled us to stay in the game through a very difficult marketplace.”
The decision to bring Vector, a massive outsourcing of GM’s logistics management, back in-house is largely considered Andersson’s decision. He told Automotive Logistics in 2007 that “we clearly understood that [logistics] was becoming a critical capability and we needed to control it ourselves.”
LSPs will now wait to see whether Andersson’s successor, Robert Socia, will seek to play as active a role for logistics as did Andersson. Socia was most recently Executive Vice President of Shanghai General Motors. Other suppliers might also wonder if Socia will strike a different tone than Andersson did for company relations, especially considering GM’s new ownership structure, including a 17.5% stake by the UAW.
But according to the OESA, an association for automotive suppliers based in the US, Socia should follow Andersson’s drive for consistency in GM, as well as his communication with the supply chain. The latter quality appears to be something that Andersson learned a little late, but excelled at recently, according to Dave Andrea, OESA’s Vice President, Industry Analysis and Economics.
“There are different views of Bo’s management style, but the truth is that as GM’s financial situation means that as one third of suppliers are being forced out, many are not happy,” Andrea told Automotive Logistics. “In the earlier days of this de-sourcing policy, the communication between GM and its suppliers wasn’t that good.”
But Andrea said that recently Andersson had really “stepped up” GM’s communication. Andersson grew to appreciate OESA town-hall meetings, which bring together suppliers with OEMs for discussion and debate. “In the beginning we held the meeting with just with the senior vice president for purchasing, but eventually [Bo Andersson] brought in everyone to that meeting who reported directly to him,” Andrea said.
Also, in the weeks leading up to GM’s financial collapse, Andrea said that Andersson would hold almost daily calls to suppliers to keep them updated and prepare them for the bankruptcy.
Andrea believes that among Andersson’s legacy at GM has been his drive for consistency across GM’s hundreds of buyers, and this consistency and communication is what suppliers are most anxious to continue moving forward, particularly in production forecasting and planning. It’s an issue quite important to logistics service providers as well. “Bo always followed a philosophy of living up to commitments, to do what one says he will do,” said May. “Under his leadership, GM has been loyal to suppliers.”
Surveys from Supplier Business have shown consistent improvement in GM’s supplier relations during Andersson’s tenure, albeit from very poor levels. Other surveys such as the Planning Perspectives Inc.’s Annual Automotive Supplier Survey put GM well behind Japanese rivals, but also shows the carmaker improving, despite a treacherous financial environment. Much of this gain has been attributed to Andersson’s speeding up payments for suppliers before the company entered bankruptcy, as well as working with the US Treasury to help set up a supplier relief programme.
But while his work on payment terms and conditions leading up to the bankruptcy have been noted, there are others who would like to see GM continue to work in better partnership with suppliers and logistics providers. Mike Silvio, Director of Supply Chain Management for tier one Cooper Standard Automotive, said that GM’s engineering and procurement team have established good parterships, and Socia must make the most of those. “It is no longer just about piece price. It is about bringing the highest quality vehicle at the appropriate total cost to market,” he said.
As for Andersson, the move to GAZ puts him in place to oversee the revival of GM’s Opel unit, which GAZ is in the process of buying from the bankrupt carmaker in a joint venture with Canadian parts supplier Magna International and Russian financial business Sberbank. In Europe, LSPs will also be waiting to see what strategy Andersson might bring to the supply chain. With Opel to be restructured, and GAZ’s supply base in need of much modernisation, Andersson is likely to be just as respected – and feared – as he was at GM.