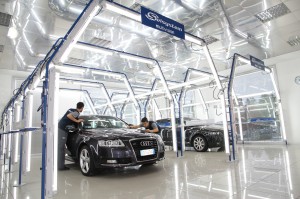 What are OEMs, claims managers and repair specialists doing to prevent damaged vehicles from damaging profits and customer confidence?

Despite the best efforts of carmakers and their logistics providers, and despite vehicles arriving in perfect condition most of the time – up to 99.75% for some OEMs – there will always be incidents of damage between factories and dealerships. How one handles damaged vehicles is a prime example of exception management and a key measurement of efficiency. Logistics executives are demanding the fastest and most cost-effective repairs as well as the highest quality. With protocols for damage repair in place, the finished vehicle supply chain relies on the expertise of repair specialists, claims managers, and logistics providers to ensure that disruption is minimised.

That is why carmakers such as Fiat Chrysler Automobiles USA (FCA), formerly Chrysler Group, track damaged vehicles throughout inspection and repair processes to ensure their repair and reincorporation into the distribution network as quickly as possible. Erika Mercado, damage prevention and claims manager for the OEM’s outbound logistics, says it can be challenging to find the perfect balance between keeping the vehicles moving and meeting customers’ expectations for the vehicle’s condition when it arrives at the dealership. Therefore, she says, FCA fine tunes its network based on trends observed from data, but more importantly, based on direct feedback from its dealerships.

The typical process is that FCA’s yards and carriers are the first to discover the damage. If damage is discovered, the vehicles must undergo a thorough inspection. After inspection, the yard communicates with an outside contractor, which acts on FCA’s behalf to execute repairs. Some types of repairs, such as battery replacements, can occur in the yard, which saves time and money. “When a vehicle needs to be towed out, such as for glass replacement, our internal goal is to have that vehicle back in the network within 48 hours,” says Mercado.

FCA has learned that, wherever possible, it is better to avoid pulling cars out of their normal flow. This means that low severity damage is often repaired at the final destination. “On occasion, we have pulled a vehicle out of the network only to find that it did not need a major repair,” says Mercado. “For example, minor damage, such as light scratches on the clear coat, could be removed in minutes by polishing out the panels at the dealership.”

For FCA, it has also been important to harmonise damage and inspection processes across Fiat and Chrysler. “Mainly, we have focused on aligning Fiat’s and Chrysler’s procedures for inspection and repairs. We found that our core processes were the same, so we implemented the best practices from each organisation,” Mercado says.

At Toyota Logistics Services, director Grant McGlynn agrees that the priority when dealing with damage should be to minimise disruption to delivery and ensure repaired vehicles meet new car quality. Toyota’s repair processes vary according to the type of damage and the location. McGlynn says that after Toyota receives a damage survey ticket from Vascor or other providers, it uses a bodyshop in the local area. It may be located near a railhead, or less often at the Toyota dealership. Another option is that the dealer submits the claim and provides the repair. The third option is on-site repair shops at the plant marshalling yard or port of import.

Like FCA, Toyota bases its damage handling and prevention processes on rigorous data analysis. It recently introduced a new system to help assess this information. “For the past year, we have been using an automated system to evaluate the time that a vehicle is out for repair,” says McGlynn. “This involves looking at data from the bodyshop, railhead, etc. to determine why it could be taking so long. Is it a part shortage or backlog at the shop? We have a system that looks at monthly averages and creates relevant reports. Prior to this, the process was manual.”

Toyota Logistics Services uses an automated system that evaluates damage repair times to help to speed up the process.

The new system helps to provide KPIs on damage repair times. For example, in the fourth quarter of 2014, from railheads it took an average of 22 days from damage identification to when the vehicle was back in the stream as a result of having to move cars on and off rail; this compared to just nine days for vehicles damaged at a vehicle distribution centre or port.

TLS already has a very low damage incident rate: in 2014 it was 0.27%, which was a small rise from 0.25% in 2013. Part of the reason for the increase was the frequent rail disruption that led to deviation from rail to road and thus increased handling. “Rail transport is riskier than truck,” says McGlynn. “The railcar availability problem means that OEMs have had to move their vehicles from rail to truck in some instances, which causes an extra move and thus more potential for damage.”

In 2015, with the worst of the rail disruptions hopefully over, Toyota is anticipating lower damages. The carmaker has also been working with railways to address particular issues, including key theft, as well as a recurring issues in which cars jump over their securements. McGlynn says that TLS has been able to reduce these problems.

“The financial implication associated with damage, to both manufacturers and logistics providers, becomes a potential source of conflict that requires eradication to avoid flow disruption,” says Sadlier. “With most vehicles now being moved in multimodal chains with multiple handover points, it is imperative that clear accountability is present through inspection to ensure accurate damage data is available.”

Developments in smart repair are becoming of greater importance to the finished vehicle industry, reducing the time repairs take, as well as the need for replacement parts and detailed repair processes, thus maintaining lower costs. Sadlier points to an incident last year in which a large OEM in Germany suffered extensive hail-related damage to more than 1,000 cars. Sevatas was able to work on behalf of the OEM’s insurer to reduce the downgrading of cars through the application of paintless dent repair (PDR) techniques. Applying this method of repair alongside parts replacement ensured a return, in full fitness, of new cars to the market without the loss of revenue for the manufacturer.

Sevatas’ advanced validation service has also delivered significant savings relating to the costs of claims. It can validate or challenge retailer claims in detail to ensure they are accurate and both the manufacturer and logistics service provider only pay the appropriate costs.

“Using statistical data collation at inspection and claims reporting we analyse data to report issues to clients, in either standardised periodical reporting or internal trend analysis that highlights spikes in data and provides an early warning system to initiate remedial activity,” says Sadlier. “Remedial activity varies based upon the structures of our clients and the services that we provide for each.”

At the core of the damage management process are the repair specialists. Among them is Selsystem, which uses PDR to repair car bodywork without the need for respraying. The company operates about 70% of its business in Europe and is active in India, Thailand, Australia and elsewhere. It specialises in dealing with complex, ‘large loss’ events, in which high numbers of mostly hail damaged vehicles need quick repair. “A ‘large loss’ is considered several thousand vehicles that are damaged in one place; it may range from 4,000 to 24,000 units,” says Dieter Fleckinger, international sales manager at Selsystem Swiss.

According to Fleckinger, the use of PDR has been growing, particularly within the past two or three years. “Demand for PDR is also increasing for heavy transport damage,” he says.

At Ballsystem, based in Perugia, Italy, sales manager Carlo Travaglini says two main types of repair services are offered to its OEM customers. A traditional body shop can remove overspray or repair contamination damage from bird droppings, sandstorms, snowstorms and chemicals. Meanwhile, for damage related to atmospheric events such as hailstorms, Ballsystem provides PDR, including processes in which it uses a cork with a lever to push the dent out from the inside. About 80% of its repairs use PDR and 20% are traditional or a combination of both methods.

Selsystem’s Fleckinger says that in an ideal scenario, a repair process map should be in place prior to large loss events in order to make sure that every party knows what to do from the beginning. “We are using adhesive technology, a pulling system tool based on adhesive, to an increasing degree,” explains Fleckinger. “We need this method mainly for multiple overlapping metal layers on the vehicle, which make it impossible to perform repairs from inside the bodywork. The advantages are no repainting is needed and that we avoid disassembly and assembly of the internal trim.”

Another repair development, although not widely used, is induction heating. “With dents on very thin metal, the risk is high that the treated metal expands to the point where the metal or stretched dent must be retightened. In this case, we use Selbox, which heats any part of the vehicle in a very short time,” says Fleckinger. “With this tool, we reform the metal from its overstretching and increase the stiffness without the need for respraying or disassembling the internal trim.”

In some damage events, such as hailstorms or other weather-related incidents, there is not always an ideal working facility in which to carry out repairs. In such circumstances, temporary mobile repair facilities are the best solution and Selsystem’s mobile repair units are able to start repair work within 24-48 hours of customers’ inquiry worldwide, according to Fleckinger.

Ballsystem’s Travaglini notes that repair times may vary widely. It could take from one or two days up to five months to complete the repairs, depending on the severity of the damage, working spaces, and volumes. However, it is important that repair companies get on site as quickly as possible. “From when we are first contacted, it usually takes 12-24 hours to reach the location,” he says. “First, we discuss the volume, facilities, etc. Then, it may take from a few days to one week to organise the team and begin the repair.”

Working more closely with the OEM and insurance inspectors helps to improve efficiency, Travaglini notes. He also suggests that centralised monitoring helps to provide the most effective and consistent results. “For PDR, countries such as India, China, and Russia do not have centralised policies or systems. Training programmes are important, which we can provide to the OEMs,” he says.