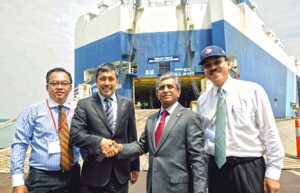 Malaysian shipping service provider, Straits Auto Logistics, has invested $20m in a ro-ro vessel capable of carrying more than 5,300 vehicles. The company, which is a joint venture between Japan’s NYK Group and local Malaysian companies, now has a fleet of six ro-ro carriers, and its executives see further growth for the sector in the ASEAN region.

The vessel, which is 14 years old and was built in Japan, has 12 decks and will have three times higher capacity than Straits Auto Logistics’ current vessels.

Managing director Datuk Adrian Henry D’Silva told The Malaysia Reserve that there was a need for increased efficiency and faster delivery within the wider automotive logistics market in the region; he claimed that expanding the capacity of the ro-ro ships would enable this.

“We operate car trailers in Peninsular Malaysia, a car terminal at Westports, car distribution centres at Kuching and Kota Kinabalu and a forwarding and customs agency company,” he said. “Customers are demanding speedy and flawless delivery of their prized vehicles, so we have upgraded our capacity with this modern class vessel.”

The company’s main customers are Toyota, Mitsubishi and Isuzu. It moves models typically built in Thailand to Sabah and Sarawek in Malaysia as well as to other ASEAN-member countries.

In further signs of the sector’s growth, fellow Malaysian shipping operator Giga Shipping has also announced plans to expand its yard facilities over the coming years. Whilst much of the group’s business is also focused around finished vehicles in the ports of Sabah and Sarawek, it stated that over the next three to four years demand would rise from Indonesia and Thailand, and as such a greater platform would be required to deal with increased flow.

Malaysia sold more than 600,000 light vehicles in 2012. The market is currently tightly controlled with duties and taxes that favour local carmakers. The market is poised, however, to see increased flows of vehicles and automotive parts to and from other ASEAN countries as a regional free trade agreement comes into effect by 2016 that will eliminate most tariffs and taxes between member countries.