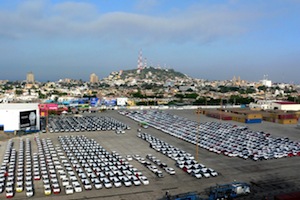 The port of Mazatlán, on Mexico’s west coast, is aiming to resurrect its finished vehicle business next year and is currently in negotiations with Chrysler to handle outbound traffic from the carmaker’s recently opened Saltillo van assembly plant, located 750km to the east.

In July this year Chrysler’s Saltillo plant began production of the Ram Promaster light commercial vehicle (LCV), which is based on the popular Fiat Ducato. Chrysler also has a truck assembly facility and engine line at Saltillo.

According to port authority director, Gil Díaz, one of the main factors that will contribute to the start of operations at the port is the reopening of the Mazatlán-Matamoros highway, which took place earlier this month after having being blocked by landslides. In addition, the port has expanded its docks area.

Modernisation plans for the port should also make it a more attractive proposition. On November 12, dredging work commenced in the access channel at a cost of $15m, with the ultimate aim of having a draft of 14.5 metres accessible alongside the quays, thereby making it possible to receive larger vessels.

In the shorter term, a revamp of the layout of the port will also be necessary, involving moving the existing ferry terminal and upgrading the landside access to make it possible to handle significant flows of finished vehicles.