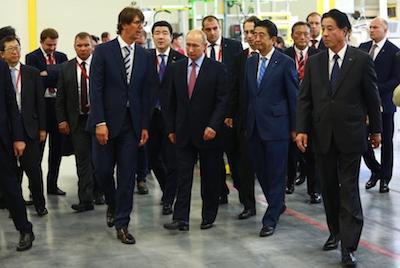 Vladimir Putin and Shinzo Abe recently attended the opening ceremony of a new engine plantat Mazda Sollers Manufacturing Rus in Vladivostok, which was launched officially on September 10. The plant is designed to manufacture 50,000 Sky Activ-G engines per year in accordance with the Euro-5 emission standard. Investors plan to export the engines to Mazda finished vehicles assembly plants outside Russia.

Vadim Shvetsov, general director of Sollers, commented that up to 100% of the Sky Activ-G engines would be exported to Japan, primarily to the assembly plant in Hiroshima. He also stressed that Mazda expected the finished vehicles equipped with the Russian engines to be supplied worldwide. He provided no details about which models the new engines will be installed in.

Speaking at the opening ceremony, Shvetsov also added that Mazda has six finished vehicle assembly plants in the world, including two in Japan and one in Russia. However, according to current plans, the engines from the new plant will not be supplied to the Russian assembly plant.

Mazda Sollers Manufacturing Rus has been running a finished vehicle assembly plant in the Russian Far East since 2012. During this period in total the plant manufactured 188,000 finished vehicles, most of which have been delivered by railway to European Russia. Up to 70% of the transportation costs were covered by logistics subsidies allocated by the Russian federal government.

There is no information about whether Mazda seeks logistics subsidies on engine exports, although the Russian government earlier proposed to issue around Rub8.4 billion ($130m) per year to cover the transport costs for finished vehicles and automotive components exports from the country from 2019.

Mazda decided to integrate with a Russian company in order to establish joint export-oriented production capacities, Shvetsov stressed. He also praised the strategic location of Vladivostok, due which is close to Asia, makeing it very attractive for manufacturing exports.

The construction of the engine plant was approved after Mazda Sollers Manufacturing Rus was granted with a residency in the Nadezhdinskaya territory of priority development and had signed a special investment contract, or SPIC, with the Russian federal government. In both cases the project has been granted with state support, including exemption from import duties on automotive components and some tax breaks.

The overall investment of the project is Rub3 billion ($60 million). Speaking to a local news outlet Prima Media the press office of Mazda in Russia said that “the length of the payback period will significantly depend on the general economic situation”, refusing to disclose any further details.