Mazda to make engines in Russia for export to Asian markets 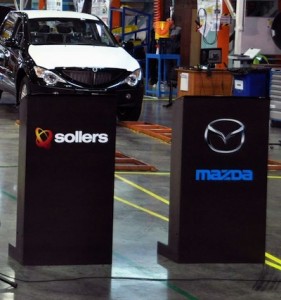 Mazda will become the first foreign carmaker to produce engines in Russia for export to its plants in Asia following an agreement with local producer Sollers. The company said it would invest RUB 2 billion ($35m) at a new engine plant to produce 50,000 engines annually at a facility in Vladivostok.

“The joint venture of Mazda and Sollers will launch big production of engines with their further export to Mazda’s plants in Asia,” confirmed Sollers’ representative Vadim Shvetsov. “This will be made not only for the purposes of localisation but also because Mazda has been facing a lack of capacity for the production of engines.”

The news follows the announcement earlier this month that Mazda and Sollers had signed a memorandum with the government to establish an engine plant in the Far East region of the country. Volkswagen and Ford have also announced plans to localise production of engines in Russia but these have been restricted to supplying the domestic market.

Production at the engine plant will be the first step in Mazda’s plans for localisation in the country as part of its industrial assembly agreement, which was signed in 2012. Based on this agreement Mazda imports automotive kits and components to the Russian plant.

Optimism for Mazda in Russia
Mazda’s president, Masamichi Kogai, pointed out that the joint venture between Mazda and Sollers remains successful despite the current turbulence in the Russian market. "Produced at the local plant cars are in demand among consumers and have become a driving force for Mazda’s expansion in the Russian market. Since the launching of our plant here in 2012 it has produced 80,000 cars,” he said.

However, according to the Association of European Businesses, Mazda sales on the Russian market fell by 46% between January-July to 14,800 cars. Experts believe that Mazda may cut the volume of production at its Vladivostok plant due to that poor sales performance.

Mazda currently makes engines in China and Japan but the move to make them in Russia will be economically feasible and could improve margins on expenditure according to Vladimir Bespalov, analyst at VTB Capital. He said the benefits included that fact production would be launched in special economical zone, which offers tax breaks and customs advantages.

“Also the company will enjoy comfortable logistics for the delivery of spare parts and export of engines, as Mazda Sollers has a sea port right near its production site,” he added.

Shvetsov also pointed out that the project with Sollers also had the potential to develop alternative materials at its plant in the Far East given that 30-40% of vehicles now consist of plastics. He stressed that the Far East had “a great opportunity to implement an export-oriented strategy and produce plastic products for automotive equipment in Korea, China and Japan."