Merecedes-Benz and Volkswagen Group have signed agreements with the Canadian government to secure future lithium supply for battery production in Europe. 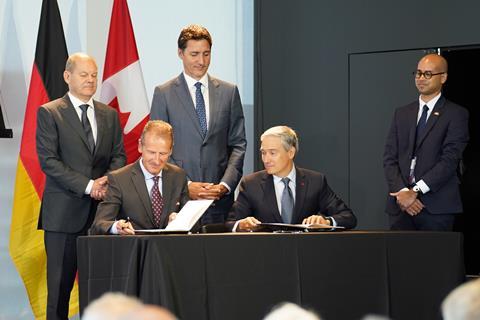 The announcements came last week, with both companies clear that the intention was to supply factories across the Atlantic and not their North America battery operations.

In the case of the VW Group, it is its new PowerCo battery production arm that has signed the MoU, which commits both parties to looking for opportunities for collaboration going forwards. Mercedes-Benz’s commitment, which is on the same terms, is on a group level and not specific to any area of its business, including trucks and passenger cars.

Herbert Diess, CEO of the VW Group, said that the agreement was part of the carmaker’s broader transformation towards EV production. “Volkswagen has been vigorously pushing the transformation to e-mobility, recognising the industry‘s responsibility in the global battle against climate change. The group today not only offers the broadest range of electric models to customers but is also rolling out an ambitious battery and charging strategy.”

Diess said that working closely with governments around the world was a prerequisite to meeting its climate goals and he thanked the Canadian government for its support. “The supply of battery raw materials and the production of precursor and cathode materials with a low carbon footprint will allow for a fast and sustainable ramp-up of battery capacity – a key lever for our growth strategy in North America.”

Mercedes Benz’s MoU is specific to the Rock Tech lithium mining project, which promises to mine 24,000 tonnes of lithium per year from 2025 onwards, from hard rock spodumene (mineral) deposits in Georgia Lake, Ontario. Rock Tech will also set up a lithium hydroxide conversion facility in Guben, Germany.

“Mercedes-Benz is looking to open new ways to responsibly acquire raw materials to rapidly scale up electric vehicle production,” said Markus Schäfer, member of the board of management and chief technology officer for the Mercedes-Benz Group. ”Securing direct access to new primary and sustainable sources of raw materials is a vital step down this road. With Canada, Mercedes-Benz has a strong and capable partner to break new ground for a new era of sustainable transformation in the automotive industry.”

Responsibility with reserves
Canada has extensive mineral reserves but does not currently produce lithium. It is estimated to have 2.9m tonnes of lithium reserve, according to Canadian government figures, the majority of which is held in hard rock spodumene. As of figures reported in 2021, there were ten lithium mining projects active in Canada at an ‘advanced stage’ and a further nine in exploratory stage. Of those projects, one advanced and three exploratory were brine (one of the most proven ways of recovering lithium) and the rest hard rock.

Evaporation and refinement from brine is the way the majority of lithium is produced worldwide. However, hard rock lithium mining has become more popular as the demand for lithium has increased. Hard rock means using water or grinding to break down the mica, which is then put through an acid leaching process to extract the lithium, a more energy intensive method of extraction but with the potential to access far more lithium.

Canada’s brine projects have particular potential to be low-impact, environmentally, as they are using already affected areas from tar sand mining and could use industrial wastewater from that mining, reducing pollution. EU legislation is set to comply particularly EV producers to responsibly source battery metals, with a stipulation that batteries should be constructed to be significantly recyclable (65% recovered by 2025) and that 10% of lithium used in EV traction batteries must be from recycled sources by 2030.

One of the biggest changes is the introduction of a carbon footprint declaration by July 2024, which will compel companies to disclose the way that they source EV battery materials and how sustainably they are managed. As a consequence, European automakers are keen to secure the environmentally conscious supply of lithium, while scaling up gigafactory facilities in the EU.