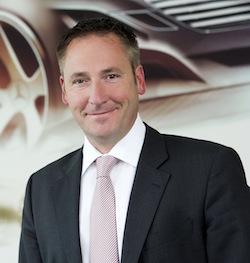 Mercedes-Benz Cars has announced it is expanding the international reach of its procurement organisation in an effort to safeguard its 2020 growth strategy. The move will see a closer integration of procurement and supplier quality functions, with locations in China, North America and South Africa playing a more important role in increasing localisation.

The carmaker said those plants were now supplied mostly with parts from the local market and it would be deepening its footprint further, starting with sourcing for the C-Class, which is going into production in plants in those three countries, as well as the Mercedes-Benz plant in Bremen, Germany.

Dr Klaus Zehender (pictured), divisional board member for Procurement and Supplier Quality, said the carmaker was developing capable and competitive suppliers as new partners, particularly in the growth areas, while its established suppliers also had the opportunity to develop along with the company’s global production and procurement network.

"Procurement close to production makes an important contribution to reaching the economic goals,” said Zehender. “With the new C-Class, we have further increased localisation in China and South Africa compared to the previous model, and in the NAFTA region we have reached a high localisation ratio from the start.”

"We have had the BMW cooperation for eight years and it is alive and well," Zehender told a roundtable discussion with the German business press on Monday. "We are looking at how to work together in Mexico. The potential cost savings are around 10%," Zehender was quoted by Reuters as saying.

He added that working with BMW to establish a supplier network was part of a broader push to make more components in overseas locations where Mercedes-Benz already had a factory.

One of those places is In China, where the local content of vehicle and engine production at the BBAC plant in Beijing already stands at around 60% and involves 250 local suppliers. The local content ratio at the US plant in Tuscaloosa is also around 60%, and local procurement in South Africa, at the East London facility, is closing in on that figure.

“In general, there are no abstract target ratios for localisation,” said the company in a statement. “Instead, the optimum for each part – in terms of parts price, logistic cost and tooling cost – needs to be achieved through local or global contract awarding.”

The global sourcing strategy is based on three pillars, with each production plant supplied by either a specific local supplier, globally supplied from one central supplier location or, thirdly from suppliers with locations close to Mercedes-Benz plants.

“Which one of these is chosen for an individual commodity always depends on where the optimum balance of parts cost, logistics cost, and tooling cost is achieved,” said a spokesperson for the carmaker.

Mercedes-Benz explained that numerous long-standing partners from Germany were on board with the new C-Class sourcing strategy as well. The company noted by example that the exhaust system for the new C-Class, which is made by Boysen, can only be produced locally due to its dimensions and needs to be provided exactly in sequence. Therefore, Boysen, which is based in Black Forest, has built new locations to produce the systems close to the four C-Class plants and thus enlarged its own international presence.