Mercedes-Benz switches from one to three LSPs in Alabama 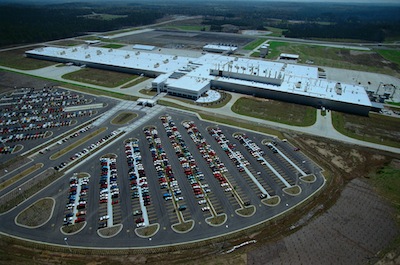 German logistics provider BLG had been handling logistics operations at the plant since 2004, including sequencing, shuttling and kitting.

All three of the new vendors were familiar names to the carmaker, but each company is operating under new and separate contracts at the central Alabama facility.

Truckload carrier Celadon, for example, provided transport services to BLG at the Vance facility as part of a shuttle operation for the 3PL, according to John Progar, vice-president of national accounts, who was responsible for Celadon’s efforts to secure Mercedes’ business as a direct vendor.

Germany-based Schnellecke Logistics, meanwhile, is a familiar name to the automotive industry and to Mercedes-Benz.

“Schnellecke is currently working with Mercedes-Benz in Brazil and South Africa,” said Jens Kappei, president and chief executive officer of Schnellecke Logistics USA. “But this project in Vance will be our largest project with Mercedes.”

BLG declined to comment on the change in business contracts at the Vance plant.

The new contracts come on the heels of a $1.3 billion construction project started early in 2016 at the Vance facility to expand SUV production, as well revamp logistics processes, which has continued the company's significant growth in production at the plant in recent years.

Schnellecke Logistics operates around the world and in the US it has been a supply chain partner for Volkswagen’s plant in Chattanooga, Tennessee, which is under 300km from Vance. It also has significant operations with Volkswagen and General Motors in Mexico.

Penske Logistics has a long list of automotive clients and has provided supply chain solutions for Daimler in the past.

“We’re pleased to begin work with MBUSI at this location,” said Marc Althen, Penske Logistics’ president. “We will be supporting production through return container management services, as well as engine and transmission sequencing. Both services are provided within MBUSI’s logistics centre located on the OEM’s campus. Overall, Penske will employ more than 100 at this facility.”

Celadon, a trailer-load specialist, will provide primarily transport and shuttle services for the Mercedes-Benz Logistics Center.

“We have six dedicated tractors for the shuttle operation and 15 drivers,” said Celadon’s John Progar. “We also provide work to Mercedes’ tier one suppliers.”

Transition of workforceWith more than 600 BLG employees affected by the announcement of the new providers, there were concerns about potential job losses associated with the vendor transition, though the new providers will offer most workers jobs.

“We intend to retain as many BLG associates as possible,” said Schnellecke’s Kappei. “We project that 99% of our new workforce will come from BLG.”

The carmaker was also concerned about the number of jobs potentially impacted by the vendor changes.

“We are very fortunate that these skilled and experienced employees will continue to support our logistics needs through their continued employment with these new providers,” said Jason Hoff, MBUSI’s chief executive in a prepared statement late in 2016. “Celadon, Penske and Schnellecke are already working to ensure a smooth transition for these employees.”

John Progar added: “We envision a smooth transition with the new 3PLs, and we look forward to expanding our presence with Mercedes in Vance.”

And then there were threeReversing a trend in consolidating vendor relationships across supply chains, Mercedes chose to replace a single supplier with three separate vendors, in part to focus on specialisation. All three providers are seasoned companies with vast expertise in automotive logistics. They have also done business with Mercedes in other countries or indirectly through other 3PLs.

Supply chain and procurement strategist Dr Muddassir Ahmed suggested that most OEMs “practice single sourcing where a supplier is able to provide the entire volume of demand for strategic commodities to achieve the desired cost, quality, delivery and lead times.”

“Not all outsourcing agreements are sole sourced,” said Karl Manrodt, director of the Logistics and Supply Chain Department at Georgia College and State University. “In some cases, multiple parties are needed due to scale or timing.

With multiple 3PL sources, collaboration is necessary in an OEM environment.

“All parties need to understand how to work with each other,” Manrodt concludes. “And the suppliers have to follow the right rules to make the multi-source model work.”

An earlier version of this story was published in December; this version has been updated with clarifications from Mercedes-Benz.