[Updated July 30th] Mercedes-Benz Cars has announced a multi-million euro investment in the realignment of its global logistics organisation that will involve both inbound and outbound flows and incorporate the supply chain management unit within its central production organisation. 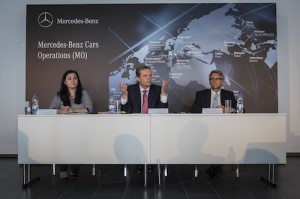 “Our investment of several hundred million euros in our supply chain management organisation will optimise logistics throughout our global production networks,” said Alexander Koesling, head of supply chain management at Mercedes-Benz Cars. “By reducing our logistics costs per vehicle we will improve our competitiveness, since logistics have a major impact on our overall cost position.”

A spokesperson for the company added that lessening per unit cost through its reorganisation while maintaining growth was now a priority.

“Through the realignment of our worldwide supply chain management organisation (logistics) we aim at shaping the logistics costs in our Mercedes-Benz Cars division disproportionally to our growth,” the spokesperson told Automotive Logistics.

Mercedes-Benz’s increasingly complex inbound material flow to its production sites, as well as the outbound transport of finished vehicles from them, is going to be centrally managed and included in global production network planning at an early stage, according to a statement by the carmaker.

“In the past, the logistics functions in the plants were decentralised,” said the spokesperson. “In today’s centralised organisation, the logistics forms the basis for an efficient production network, while allowing maximum flexibility in manufacturing.”

The supply chain management unit is responsible for planning and managing Mercedes-Benz’s global production programme. This includes ensuring the on-time delivery of materials inbound to the plants, and their allocation within the plant to the point of assembly.

With regard to in-plant logistics, Mercedes highlighted a project currently being implemented at its plant in Kecskemét in Hungary. Materials used in the final assembly area are brought to the line in pre-packaged baskets by driverless transport systems (DTSs).

In terms of recent examples of its reorganisation of outbound finished vehicle deliveries, the company is building a network hub in the Adriatic, from where it will ship vehicles to Asia. The Slovenian port of Koper is in the process of finalising a contract for a vehicle handling transhipment facility, which is believed to be with Daimler, though this has yet to be confirmed by either party. This year the company will focus on exports to China from Koper, with other markets in the Far East to follow next year.

Finished vehicle logistics is already organised across departments, meaning that there is no significant overhaul for the department. Though outbound logistics at the plants is being merged into central production, the company said this would have no impact on its existing relationships with outbound transport providers and all key accounts will remain the same.

The decision to realign its logistics operations is part of the carmaker’s growth strategy – Mercedes-Benz 2020 – and involves expanding global production and the supplier network closer to the markets in which it sells vehicles.

Part of this process will be to focus on securing the supply of materials across global production networks, according to the company, as well as reducing inventory and ensuring timely delivery of vehicles to the customer.

“Logistics plays a key role for our company’s success,” said Schäfer. “Our objective is to gear our supply chain management organisation towards growth and to make it even more efficient and flexible. This approach marks the next logical step in our global production strategy.”

Global distribution from Speyer
Mercedes-Benz made the announcement about its logistics investment at the opening of its new €90m consolidation centre in Speyer in southwest Germany, a facility it said it was considering replicating in growth areas such as China and the NAFTA region.

The 21,000sq.m Speyer facility consolidates production materials from European suppliers for onward transport to its plans in China, the US and South Africa. It will become fully operational next year when the company expects to be shipping “several hundred sea containers every week” by rail and inland waterway to the ports of Antwerp and Bremerhaven for onward transport to Beijing in China, Tuscaloosa in the US, and the South African plant located in east London.

Logistics provider Syncreon is managing the trans-shipment of materials from inbound trucks to containers at Speyer, while specialist transport provider Contargo is handling the transfer of those containers to inland waterway or rail.

“Thanks to the new consolidation centre in south-western Germany, deliveries from European suppliers south of the Main River will no longer have to be shipped over long distances, which will significantly reduce the logistics costs,” said the company in a statement. “This, along with the direct links between the centre and the ports via inland waterways and rail lines, will lower relevant CO2 emissions by more than 25%. After intense examination, Daimler chose Speyer for the new centre because of the available space and the geographic location.”