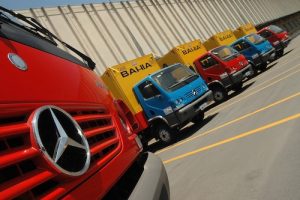 Mercedes-Benz Trucks in Brazil has said it expects to more than double its exports of trucks to the Middle East and North Africa during 2017.

Last year it exported 348 units to the region, consisting of 202 medium-weight Atego trucks and 146 light and medium-weight Accelo trucks. In 2016, the majority of these went to Saudi Arabia, Egypt, Jordan and the UAE.

Sales from Brazil to these countries only began at the end of 2015, following a decision by Mercedes-Benz’s parent company to allow its Brazilian subsidiary to supply medium trucks to those markets.

In total, Mercedes-Benz Brazil exported 6,382 trucks last year – a quarter of its entire production in Brazil. The Accelo was the biggest seller, with 2,000 units exported, mostly to Latin America, the Middle East and Africa.

As a whole, exports of vehicles and parts from Mercedes-Benz Brazil to the Arab world were worth $295m last year, up 153% over 2015. The main consumers of Brazilian-built trucks were Saudi Arabia, Qatar, Egypt, the UAE and Algeria, according to Brazil’s Ministry of Industry, Commerce and Services.

Mercedes-Benz remains the largest Brazilian exporter of commercial vehicles. In addition to its trucks, it also exported 6,527 buses last year.

According to Philipp Schiemer, president of Mercedes-Benz do Brasil and CEO for Latin America, Argentina was the largest customer for the Accelo, acquiring 1,758 units, with Peru and Chile also being important customers.

"Established in Brazil, the Accelo is already successfully serving a variety of markets in South America. In 2016, other regions, such as the Middle East and North Africa, began to emerge as well. In other words, a product developed by Mercedes-Benz do Brasil is breaking into other markets as part of a global solution for Daimler Trucks,” he said.

For customers in the UAE, a version of the Accelo is being produced with a vertical exhaust, increased front protection, high temperature tyres and yellow gyroflex illumination, plus labels, plates and manuals in both English and Arabic.

Mercedes-Benz led truck sales in Brazil in 2016, selling 13,915 units to the domestic market there to end the year with a 29.6% market share.

In other news the truckmaker extended its contract with Ceva Logistics in Brazil covering inbound and aftermarket services for its Juiz de Fora assembly facility in Minais Gerais.