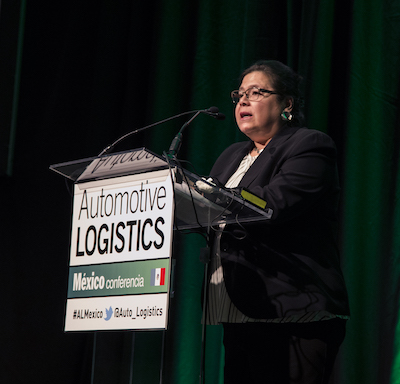 The Mexican government has confirmed that it will seek to maintain the current advantages of the North America Free Trade Agreement (Nafta), including tariff-free trade of automotive parts and vehicles, in upcoming negotiations with the governments of the US and Canada. It will also seek to further reduce regulatory barriers to trade, as well as update customs processes.

Maria Véronica Orendain de los Santos, director general for heavy industries and high tech at the Mexican Secretariat of the Economy (pictured), the branch of government that will be closely involved from the Mexican side, said that the Mexican government wants to approach negotiations in “continuing the spirit of openness and removing barriers”.

Speaking at the Automotive Logistics Mexico conference in Mexico City, Orendain de los Santos pointed to Mexico’s central role in the North American automotive supply chain, including as a vehicle producer and the largest foreign supplier of parts to US factories and customers. While she credited Mexico’s competitiveness globally, including its relevance to trading with Asia and Europe, she maintained that Nafta was critical to the country’s success.

“Nafta is the most important tool for Mexico, and we will aim to preserve the status of this agreement and trade flows, and deepen our collaboration [with the US and Canada] where possible,” she said.

Donald Trump has consistently agitated against Nafta both as a presidential candidate and since winning election in the US, including attacking carmakers that build cars in Mexico and sell them in the US, such as Ford, GM, FCA, BMW and Toyota. He has threatened import duties on products built in Mexico; recent considerations have included a 20% import tax to pay for a border wall, and a ‘border adjustment tax’ that would effectively tax the cost of imported products to companies while excluding tax for exporters.

According to Véronica Orendain de los Santos, the message from the Mexican president, Enrique Peña Nieto, as well as from the secretary of the economy, Ildefonso Guajardo – who leads Orendain de los Santos’s department and plays a key role in Mexico’s free trade agreements – has been to emphasise stability and maintain a successful three-way relationship within Nafta.

“We recognise that the US administration has taken an aggressive tone, and that these will be difficult negotiations,” she said. “We want to send a message of tranquillity.”

Orendain de los Santos suggested that the hard line from Donald Trump and his closest policy advisors was “something of a negotiating tactic” and that she was hopeful that common ground could be found. She also pointed to the difficulty that would be involved in taxing automotive parts between Mexico and the US, which often criss-cross the border up to nine times between sourcing raw material and building and selling a finished car.

“So far, however, official negotiations have yet to begin and we have yet to receive concrete demands or proposals from the US government,” she said.

Al Zapanta, president and chief executive of the influential US-Mexico Chamber of Commerce, and a potential candidate for the post of US ambassador to Mexico, has also suggested that the threat of import duties would be part of negotiating tactics. Although he does not speak on behalf of the US government, he predicted that an import tariff would not be imposed.

For her part, Orendain de los Santos pointed to potential areas that could be discussed around improving regulations, or modifying the minimum requirement for the amount of North American-sourced parts that a vehicle must contain to qualify for tariff-free shipping across Nafta, which is currently 62.5%.

She also pointed to improvements that had been made on sharing information and standardising processes for the US-Mexico border and customs, areas in which she admitted there was room for improvement. Mexico aims to have a completely digital and paperless customs platform in place by 2030.

Orendain de los Santos stressed that the Secretariat of the Economy and other departments involved in negotiations wanted to include as much input from the private sector and industry as possible, and she stressed that manufacturers, suppliers and logistics providers should get in touch with her to express their views.