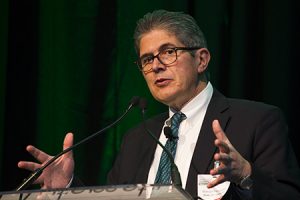 Carmakers, tier suppliers and logistics providers are becoming increasingly cautious about investment in Mexico, downgrading some plans or holding back on decisions amid the uncertainty of Mexico’s future trade relations with the United States and potential changes to the North American Free Trade Agreement (Nafta).

Mexico has been one of the largest recipients of automotive investment since the recession of 2008-2009, including in assembly and component plants, as well as logistics provider facilities, equipment and services. In 2015 alone, for example, around $5 billion of new automotive investment poured into the country, according to Maria Véronica Orendain de los Santos, director general for heavy industries and high tech at the Mexican Secretariat of the Economy.

In the central state of Guanajuato, one of the biggest recipients of automotive investment, more than $10 billion has been committed for the period from 2012 to 2018, according to Manuel Fernandez (pictured), head of investment for the state.

However, while specific figures are not yet available, there now appears to be some hesitance to invest, following the election victory of Donald Trump as US president, who has been sharply critical of Nafta and repeatedly threatened to impose some kind of import tariff. The Trump administration has already formally given notice to Mexico and Canada of its intention to renegotiate Nafta.

Fernandez said cancellation earlier this year of a $1.6 billion Ford plant in San Luis Potosi had caused a number of suppliers in neighbouring Guanajuato to cancel plants as well. “We felt some collateral damage from Ford’s decision,” admitted Fernandez.

“In other cases, we see some companies are postponing facilities and investment because of uncertainty, or are changing their plans to a smaller scale.”

Bocar Group, a Mexican-based supplier of plastic moulding and aluminium parts to the automotive industry with plants dotted across Mexico serving customers across North America, is taking a more cautious approach to investment, according to Carlos Lazzeri, head of logistics.

“With a potential crisis to come, we cannot overinvest, but need a more efficient use of resources,” he said. “For example, we are looking to fill capacity in our existing plants rather than to add new ones.”

Falling peso, rising pricesSome logistics providers are also slowing or stopping investments, although not necessarily as a direct result of Trump’s threats. Over the last two years, the country has seen a rise in the number of vehicle logistics carriers and car-carrying trucks on the road, with occasional capacity shortages, according to Roberto Zavala, country manager for Mexico at WWL. That investment was driven in large part by growth in the Mexican domestic vehicle market, which rose by 18% to more than 1.6m units in 2016, including around 910,000 imports, a growth of 34%. A share of exports also moves by truck, mainly to ports.

WWL estimates that the number of car-carrier trucks in operation in Mexico rose by 50% over the past two years, from 1,600 units to 2,400, including the emergence of three new brands.

WWL projects the need for more trucks based on growth in the Mexican vehicle and export market of around 6% per year. Already, Zavala said that around 350 more trucks are planned to enter the Mexican market in 2017, which would keep supply in line with demand. However, Zavala admitted that uncertainty in the market could jeopardise these projections.

Furthermore, the sharp devaluation of the peso – which has fallen further since Trump’s election victory – has increased the cost of car carriers, since most of the trucks and equipment are made in the US. “The steep increase in fuel prices in Mexico is also pushing up the cost of transportation,” he added.

As a result, investment in equipment has started to slow and could fall further.

Staying on trackEven in the current uncertain climate, however, many companies remain committed to production in Mexico and previous investment plans. General Motors, Volkswagen, Audi, BMW and Toyota, for example, have all remained committed to their respective investments there.

Karl-Friedrich Koch, vice-president of production control and logistics at BMW Mexico, said the carmaker remained committed to its timeline and plans to open a new plant in San Luis Potosi in 2019, and that it was thus seeing investments and plans from its supply base.

“We do run risk assessments and ‘what if…’ scenarios, but so far we remain on track,” he said.

At Audi, serial production of the new Q5 in San José Chiapa, in the state of Puebla, began as scheduled last year, with market launches of the vehicle set for 2017. Peter Koltai, head of production control and logistics, pointed to a developing supply base in Mexico, with nine suppliers now on site at the plant’s supplier park. The carmaker also launched a new vehicle logistics yard at the plant, which includes hail-protective structures, and space for rail loading; it is managed by WWL.

Alfonso Gutiérrez, head of inbound and outbound logistics planning at Volkswagen Mexico, said that the carmaker was also growing its output – it recently launched production of the new Tiguan SUV at its plant in Puebla – and is receiving support from its logistics base.

“Since November, we have run around 15 logistics-related tenders across inbound and outbound transport, much of it for new business,” he said. “We’re getting a good response from the market.”

Logistics providers have also recently announced or launched new logistics facilities, including a cross-border crossdock from Landstar, and a new warehouse by Yusen Logistics.

Even Ford is expected to increase production in Mexico despite cancelling the plant, as it adds output to its existing plant in Hermosillo, in the north-west of the country. According to Fernandez, Ford is still going ahead with its $1.3 billion expansion of a transmission plant in Irapuato, in Guanajuato state.

“The expansion of the transmission plant, which was formerly a joint venture with Getrag, is still on track and hopefully we will not see any changes,” he said.