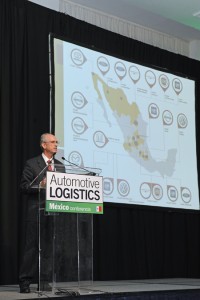 If Mexico’s automotive production figures reach more than 5m in 2020, as they are forecast to do, it will put a significant strain on Mexico’s rail and truck infrastructure. It is no secret that more trucks and railcars will be needed to cope, and infrastructure projects will need to be completed.

Speaking at the 2016 Automotive Logistics Mexico conference, Carlos Velez, vice-president, business solutions and marketing, Kansas City Southern Mexico (KCSM), said that Mexico’s railways are keenly aware of the incremental volume, and that preparations continue to focus on expanding infrastructure. This year, there are at least 32 projects underway by the railways to improve and expand their infrastructure, including sections of mainline double tracking, new sidings and extensions, bridges, and yards. The most important of these rail infrastructure projects is the Celaya bypass.

The Celaya bypass route would allow Mexico’s two Class I railways, Ferromax (FXE) and KCSM, to bypass the city. However, the project is now years overdue and effectively out of funding. Until the project is complete, trains have to slow down considerably when travelling through the area, which leads to more theft and vandalism on board.

Velez said that the Celaya bypass would help to create a safe corridor for rail, increase safety for the community, increase rail speed in the area, and will streamline the operation for both rail operators in the fast growing Bajio region. However, significant issues still remain. The slow process of acquiring land is causing prices to escalate, as a small group of landowners control the required land. The budget reduction in 2015 has also caused delays to the project, and no federal budget has been assigned in 2016. However, the SCT (secretariat of communications and transportation) has said that the construction of the bypass should be completed by December 2017 as it is a presidential commitment.

In the meantime, KCSM will stay engaged with different levels of government to express the importance of completing the bypass. KCSM and FXE are also working with the SCT on potential alternatives to accelerate the project. Velez suggested that OEMs could help by voicing their support for the bypass and engage with their government relations departments to speed the completion.

It’s not just the railways that will be struggling with the increase in production; the trucking industry will be feeling the heat too. Roberto Zavala, country manager, WWL Mexico said that trucking capacity was a significant issue in 2015, and the lack of trucks created a situation where dealers actually lost sales, which has been previously unheard of.

Trucks are not only used in Mexico to carry domestic volumes, but also carry 100% of sales consumption (domestic production plus imports), 100% of exports from plants with no rail, 100% of exports to ports with limited rail access, and a percentage of exports and imports to/from ports to cover railcar shortages.

Last year, 1.6m vehicles were moved by truck in Mexico, estimated Zavala. Of these, 1.35m were sales, and 0.25m were for export. Conducting supply analysis on long-haul trucks only, Zavala said there are around 15 carriers in the market currently, 10 are long established, and the three major players have more than 50% of total capacity. Last year, three new carriers emerged, and added more than 100 trucks to the system – but it was still not enough.

All this, Zavala said, added up to the perfect storm: the added capacity did not match the sales growth; production shifts reduced some of the synergies achieved; additional imports from ports increased cycle times; there was a lack of qualified drivers; and extensive construction works were taking place across the centre of Mexico. 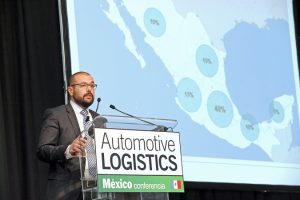 Looking ahead, two more plants are starting production in Mexico in 2016, and one of these will have no rail access initially. Though he did not name the brand, Zavala was referring to Kia's plant in Monterrey, where disputes with the local government have held back rail infrastructure development. In the meantime, shipping will fall back onto trucks.

Zavala said, “Vandalism on the railroads will also potentially incentivize the use of trucks.” In 2017 and onwards, “things really explode”, and even more trucks will be needed. By 2019, it is expected that 2,450 trucks will be required to meet the demand of the Mexican market, up from 1,900 in 2015.

Zavala expects that more new players will join the market in 2016. These new players will hopefully invest, while other, more-established carriers will be cautious. However, despite the investment from new players, finding reliable drivers will continue to be an issue, much like it is around the world.

A video recording of presentations by KCSM and WWL, along with the rest of the conference, is available here.