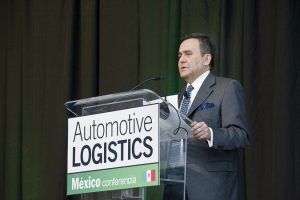 Ildefonso Guajardo Villarreal (pictured), Mexico’s secretary of the economy under its president Enrique Peña Nieto, gave a brief history of the country’s automotive industry while speaking at Automotive Logistics Mexico 2016. First there was the ‘construction phase’ that started in the 1960s with several automotive decrees that led to the development of the country’s first full-scale manufacturing plants. Later, following the establishment of NAFTA in 1994, and subsequent free trade agreements, came the ‘growing phase’, which saw OEMs increase their capacity and exports from Mexico. As a result, production in Mexico grew from 800,000 light vehicles in 1990 to 2.8m vehicles in 2012.

“Today, we are on the verge of what I call the ‘exponential phase’, in which Mexican production of vehicles is growing in both volume and quality, by advancing in technological sophistication to get into the production of premium vehicles,” he said.

To succeed in this phase, Mexico must also face several supply chain challenges, he added, including developing specialised logistics, strengthening the automotive parts industry, and staying on top of the wave of the fourth industrial revolution that is already happening. The goal is not only to reach 5m units of production by 2020, as most analysts currently forecast, but to deepen skills across the supply base and thus compete at a global level.

For Mexico, the logistics sector is poised to be either a key enabler of this development, if is does not become a stumbling block. The country does have a relatively developed infrastructure. For example, there are currently 68 border crossings between Mexico and the US, including 58 in the north, and 10 to the south (although the automotive industry concentrates most of its border crossings at Laredo and El Paso). The country has 117 deep-sea and coastal ports (although a large share moves through just a handful), nearly 27,000km of railways, and 390,000km of roads and highways. So far, the country has coped, but with the huge increases expected, Guajardo said that this won’t be enough to reach the figures expected in 2020.

Guajardo said that the government understood these limits and requirements, and was working to address them. He explained that an institutional group has been set up comprising members from the ministry of economy, finance, and communications to plan logistics across Mexico. “We are working to plan ahead for the needs of logistics to move products and people,” he said.

There are thus many areas of needed investment for Mexico's infrastructure in Mexico. Guajardo said the bad news is that, because of the collapse in the price of oil, Mexico’s federal budget has suffered through the drop in its oil revenue. However, he was confident that private investment would fill the gap.

“Projects on fiscal resources need to be placed into public-private partnerships. When I talk to friends in the industry, the worry is not about having to pay a fee for the use of good port facilities, the worry is not to have them,” he said.

The country also faces security issues that impact freight movements. Guajardo said out of the 32 federal entities in Mexico, three are facing difficult conditions of insecurity, where institutional strength does not exist locally. In certain places, including in Guanajuato and Aguascalientes, crime is actually lower than many parts of the US. “However certain border crossing points do have specific issues, including theft and vandalism. We have worked with the federal police whenever we encounter troublesome statistics,” he said.

Last year, FreightWatch International published a report stating that the states of Mexico, Puebla, and Guanajuato have the highest risk of trucking theft. Looking at Veracruz and Tlaxcala also, those five states combined account for 52% of attacks on trucks.

“Mexico is a mosaic and it represents the conditions of every single entity. In order to strengthen logistics and transportation, we have been working with the federal police division,” said Guajardo. “The future challenge will be to organise the 32 entities to avoid a spillover effect among the country. The industry is in continuous communication with us and with our security, so we will prevent any issues throughout the country.”

A competitive supply base

The automotive parts industry also needs strengthening. While Mexico has a strong supply base including around 850 automotive parts companies that represent exports of around $50 billion per year, Guajardo said it is important to work with different part suppliers to improve quality, and reach the high standards required. A government body has further joined the Automotive Industry Action Group (AIAG) to help suppliers raise their standards to match US counterparts. “We are also making an effort to get ISO certifications to be able to export to more markets,” he said.

Overall, Guajardo was upbeat on Mexico’s supply chain and automotive outlook. The Trans-Pacific Partnership, once ratified, will further open up major markets in Asia and Latin America to Mexico. Likewise, with investment in high-value vehicles in Mexico, he also maintained that the country was not just a low-labour source for carmakers.

“The final goal is to complete the cycle of logistics, production, services, engineering and development required by the automotive industry to exploit all its value-creating potential,” said Guajardo.

A video recording of Ildefonso Guajardo's speech, along with the rest of the conference, is available here.