Mexico conference: Swapping customs agents, cross-border trucking and other happenings on the border 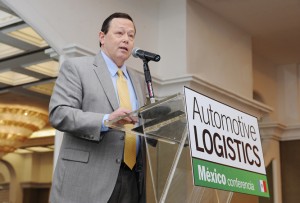 Efforts and projects to improve US-Mexico customs and border operations are the most promising they have been in decades, according to William Duncan (pictured), the chargé d’affaires for the US Embassy to Mexico. Important trials are underway for pre-clearance inspections, while there is work to increase capacity on both sides of the border.

Speaking at the Automotive Logistics Mexico 2016 conference, Duncan, whose head the embassy in Mexico, pointed to recent breakthroughs that could eventually make significant improvements to companies doing business on either side of the US-Mexico border, including automotive manufacturers. Last year, for example, a new bridge was opened between Brownsville, Texas and Matamoros, Mexico, the first new crossing in about a century. In a few weeks, another new opening will begin operations near El Paso, Texas and Juarez, Mexico.

However, the most significant development for Duncan is currently happening on a small scale. As of just the last few months, several trials for cargo pre-inspection have begun on the US side in Laredo, Texas, as well on the Mexico side in Tijuana. In each case, American customs officials are working on the Mexican side of the border, and Mexicans on the US side.

“This may not seem like a big deal, but it is a significant step forward, and could pave the wave towards more seamless border crossings,” said Duncan. “To make it happen, Mexico even had to change a federal law to allow US customs officers to carry their firearms in Mexico. Those were the kind of things that held us up in the past, but which we are now able to work through.”

Duncan said that if these two trials were successful, they could pave the way for considerable reductions in time for customs clearance, as goods can be pre-cleared prior to reaching the congested border. “These programmes will reduce time and waste. We want to see seamless border crossings,” he said.

Duncan indicated that further projects in pre-clearance were also under consideration, though he declined to give more detail at this point. “We have ideas kicking around. It is time to write the second act to the customs agent project.”

There has also been progress in communication and dialogue across Mexico-and US-based industries, added Duncan. He pointed to an initiative, called the ‘High Level Economic Dialogue’, or H-LED, that has brought together leaders from industry with the embassy to discuss ideas and processes to improve ways of doing business between the US and Mexico. The president of General Motors in Mexico, Ernesto Hernandez, is a member of H-LED.

“We want to hear your ideas and your issues,” he told delegates. “You can send ideas via H-LED, or you can reach out to us, email us directly.”

Despite progress, Duncan admitted that the border still had plenty of problems, with many rules and processes slow and “byzantine”.

“If you were going to design the border crossing today you would not design the one that we have, with the drayage system and other issues,” he said. “But we are finding ways to improve.”

Duncan, who first had an assignment in the US foreign service in Mexico back in 1993 on the even of NAFTA, pointed to the huge flow of goods and people across the border everyday, and the critical role that it plays in both the US and Mexican economy. Since NAFTA, for example, trade between the two countries has grown by around 600%.

“I’m not supposed to say how many jobs trade with Mexico helps to create or support in the US. But, clearly, it’s a whole bunch of them,” he said. 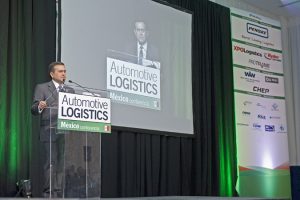 Ildefonso Guajardo (pictured, right), the secretary of the Economy for Mexico, however, pointed out that certain issues remained over which he would like to see more engagement from the US government. In particular, the US is still not fully open to Mexican truck equipment and truck drivers moving goods directly from Mexico for delivery into the US. Instead, material must still be transferred to US equipment in a complicated drayage process. This is despite agreeing to an open market more than 20 years ago with NAFTA, and following several trials and attempts to open up services in recent years.

While US law now technically permits Mexican truckers to move back and forth across the border, in practice a host of insurance, liability, equipment regulations and other issues have prevented more than a handful of companies from operating this way. Chris Styles, senior director of logistics for Nissan North America, for example, said that he so far saw little evidence of Mexican companies wanting to offer such services.

Guajardo said the truck issue was a stumbling block in the commitments of NAFTA, and a violation of the agreement. “I am hearing from some companies that there are tricks being used to not allow the free flow of services, but at the end of the day we’re monitoring it very closely,” he said. “The US the most competitive region in the world, but it cannot make it with monopolistic services and not allowing free competition. It’s deeply hurtful the way in which we manage the border and we have to keep fighting.”

According to Guajardo, Mexico and the US meet at a high level every three months or so to review processes across the border, and he stressed the need for investment on both sides. On some occasions, however, he felt that the US has not responded enough.

“We have to plan together, facilitate border crossings, and improve the certification process to be able to cross the border more efficiently,” he concluded.

Rachael Hogg contributed to this report.

For a full report and links to other coverage of Automotive Logistics Mexico, click here.