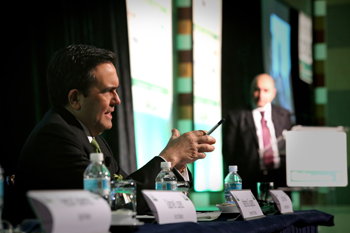 The North American vehicle industry could lose out on export market potential and manufacturing integration as a result of the exclusion of Mexico and Canada from the ongoing negotiations for a free trade agreement between the European Union and the United States.

According to the Mexican Secretary of the Economy, Ildefonso Guajardo (left), it would have made much more economic sense for the agreement to be along regional lines rather than the bilateral negotiations that are currently ongoing between the US and the EU.

“Before we came into government [in 2012], I had requested that the agreement with the EU should be one between NAFTA and the EU, since we all work together. However, I believe that the White House was not ready due to the complications of the negotiations,” said Guajardo during the Automotive Logistics Mexico conference in Mexico City.

Instead, the suggested approach from Washington has been that the US completes negotiations with the EU, and that later, Canada and Mexico, which each have separate agreements with the EU, could work towards converging the three agreements into a regional one.

“From the point of economics, it doesn't make sense,” he said.

Negotiations for the so-called 'Transatlantic Trade and Investment Partnership' between the US and EU are still ongoing, and remain difficult from both political and regulatory points of view. The trade bloc would be the most significant globally for automotive trade, and details around vehicle safety standards, emissions and other harmonisation issues are important to the debate (read more here).

According to Guajardo, a bilateral agreement with the EU could mean that standards such as vehicle harmonisation, safety and export requirements may not be applied in Mexico, and could potentially lead to divides within NAFTA, where carmakers and tier suppliers already share production capacity across the three countries. Many carmakers are investing in Mexico with the target of exporting not only to the US and Canada, but also to Europe, including premium brands Audi, BMW and Mercedes-Benz.

"A lot of European companies are also invested in Mexico, and if the rule of origin in the agreement is highly restrictive, it would shoot many European and American companies in the foot," said Guajardo. "It would make no sense for the restrictions of those agreements to be a block on building our capacities together."

Mexico has hired a consulting group that is advising negotiators on the kind of actions in the EU-US agreement that would hurt the ability of North America to be effective in production, supply chain and exports, said Guajardo.

Negotiations between Mexico and the EU to update their existing trade deal, which was signed in 2000, will begin in March this year. "We will work hard to make sure this is finalised by next year," added Guajardo.

A history beyond Mexico

According to the US ambassador to Mexico, Anthony Wayne (pictured below right), the intricacies of the EU-US trade deal are complex and go well beyond issues specific to Mexico or to the automotive sector in NAFTA.

“The reason that [the US government] wanted to sit down with the EU is that we have a whole set of issues, like agricultural differences over both food safety and standards, over farming subsidies, for example, or professional services, with accusations going on both sides of the ocean,” said Wayne during a press conference at the Automotive Logistics Mexico conference. “On these and other issues, we have a history with Europe, and it is not always the same one that Mexico has with the EU.”

According to Guajardo, there were political constraints in Brussels as well. "Europe was not ready because Turkey was asking Europe to join, so if the US opened the negotiations to Mexico, the EU would have been forced to include Turkey, which would have been politically risky."

While Mexico is not included in the US-EU deal, both Canada and Mexico are involved with the US in the current negotiations with a number of Asian markets for a wide-ranging free trade deal, called the Trans-Pacific Partnership (TPP). According to Wayne, the TPP will also be a means by which some elements of NAFTA, which is now 21 years old, may be updated. 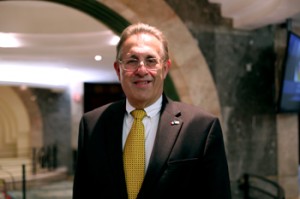 “I wouldn’t preclude further agreements with Mexico specifically, but TPP will be a way to deal with some of the current differences within NAFTA,” he said. “The e-commerce issues today versus 1994 are very different, for example. We are trying to include some of these issues in the new agreements.”

However, neither Wayne nor Guajardo advocated a new deal that would replace NAFTA, focusing instead of improving border processes and customs clearance rather than a deeper economic integration.

“We are tryiing to improve the relationship with North America, but not with the NAFTA 2.0 that has sometimes been discussed. Rather, we are looking at how to improve transaction costs, border crossing, how customs works at the border, and improve harmonisation of standards, as it is completely illogical to ask different requirements of an industry that is working together,” said Guajardo. “Sometimes a [vehicle] part has to go across a border seven times in order to be placed in a [finished] unit, so the harder we make it for you to cross the border, the less competitive the North American continent becomes.”

Wayne also emphasised the importance of improving border crossings, security and customs processes, while stopping short of any major changes or replacements for NAFTA. “There are clearly a lot of advantages to NAFTA that have brought a lot of good things,” said Wayne. “The TTP won’t replace NAFTA.”