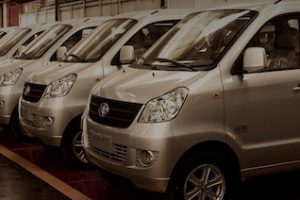 Giant Motors, a manufacturer of Chinese commercial vehicles in Mexico, is set to launch two new SUV models in a joint venture with China’s Anhui Jianghuai Automobile (JAC Motors) to serve Latin American markets. It will be the first Chinese-brand passenger vehicle built in Mexico for the local market and for export.

Giant Motors is a ten-year old joint venture owned by Inbursa, a Mexican financial company owned by telecoms billionaire Carlos Slim, together with Chinese vehicle maker FAW. It has an assembly plant in Sahagún, in the state of Hidalgo, about 100km from Mexico City, which builds and distributes FAW minivans and trucks for Mexican dealers.

In February, Giant, together with JAC Motor and Japanese distributor Chori Company, announced they would invest 4.4 billion pesos ($232m) in the Sahagún plant to add JAC’s S2 and S3 SUV models to the assembly line. Carlos Slim will be the principal shareholder in the company via Inbursa.

According to Giant, the company will use mostly Chinese imported parts and target the Mexican as well as Latin American markets – and therefore not depend on the North American Free Trade Agreement (Nafta) with the US and Canada, which is expected to be renegotiated under the demands of the Trump administration in the US. The two SUVs were due to be unveiled this week. In an interview with the Financial Times, Giant Motors chief executive Elías Massri said that the company would not export to the US and would not depend on Nafta requirements, which include parts localisation in North America above 62% to qualify for duty-free trade across the US, Mexico and Canada. Instead, it would use parts imported mainly from China and ship finished vehicles to Central and South America. “We’re not big enough to export to the US and that would require a different level of investment,” Massri said. “But we want to be a hub for exports to Latin America…within four years.

At a news conference last month, Hidalgo state governor Omar Fayad said that up to 10,000 vehicles could be built at the plant within the next four years. Massri told the FT that production could reach around 12,000, split between passenger vehicles and trucks. The manufacturer expects to add several more JAC models later this year.

In February, Giant separately announced plans to introduce a Mexican-built electric taxi that it has developed, which will be built together with Moldex, a subsidiary of baking giant Bimbo, and the Monterrey Institute of Technology, a Mexican university. Moldex has a plant for electric trucks in the state of Mexico. Figures were not available on Giant’s current production and sales, which includes three commercial vehicles. However, the Mexican market for vans and heavy trucks is relatively small; the country sold 13,800 minivans in 2016, according to AMIA, the Mexican automotive association. Giant’s expansion into passenger SUVs and exports, however, is a response to the recent growth of the Mexican domestic market, as well as a pursuit of trade advantages beyond Nafta.

Despite uncertainty in the wider Mexican economy following the US election, including a sharp devaluation of the peso, the country’s vehicle market has grown sharply in recent years, from 1m units in 2013, to more than 1.6m units in 2016, according to AMIA. That includes SUV sales of more than 312,000 last year, more than double compared to five years ago. Beyond Nafta Threats and criticism from Donald Trump, both as a presidential candidate and as president, continue to raise questions over the future terms or existence of Nafta.

The spate of investment in Mexican plants over the past five years have been largely based upon access to the growing US market. At a press conference last month, Mexico’s economy minister, Ildefonso Guajardo, who will represent Mexico in upcoming Nafta negotiations, said that the investment in the Giant Motors plant comes at a crucial moment for Mexico, as the country needs to diversify its exports to markets beyond the US. Mexico has agreements for vehicle exports with 45 countries thanks to around ten free trade agreements, including with much of Latin America thanks to preferential access to the Mercosur trading bloc, which includes Argentina, Brazil, Paraguay and Uruguay, as well as the wide-ranging Pacific Alliance agreement, which includes Mexico with Chile, Colombia and Peru.

Mexico is also part of the Trans Pacific Partnership, from which Trump recently cancelled US participation. However, Nafta continues to be the dominant destination for vehicles produced in Mexico. In 2016, Mexico exported 2.13m vehicles to the US, or 77% of exports. Meanwhile, vehicle shipments to its top destinations in Latin America, Columbia, Brazil, Argentina and Chile, numbered only around 154,000 vehicles last year, or 5.6% of exports.

The investment from JAC, although small by comparison to European, Japanese and American investment in Mexico, is in line with expectations from some analysts that Chinese companies could look to fill the gap left by some western brands who may stop or halt investment in Mexico in the face of Trump’s threats. In January this year, for example, Ford cancelled a planned $1.6 billion plant in San Luis Potosi, although the carmaker said it was for market reasons rather than to do with trade policy.

While Chinese presence in the Mexico automotive industry remains limited, the trade in vehicles and parts has grown. According to Chinese logistics firm CDC International, Mexico imported around $2.5 billion worth of Chinese automotive goods in 2015; it exported around $2 billion. “We believe there is much to come in terms of cooperation between Mexico and China, and perhaps especially for the suppliers’ supply chain between China and Mexico,” said Vegard Synnes, head of key accounts at CDC, speaking earlier this year at the Automotive Logistics Mexico conference. In recent statements, Carlos Slim has also urged Mexico to look to markets beyond the US.