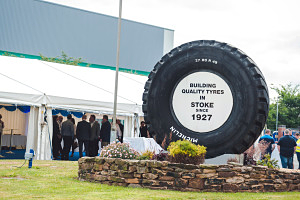 Michelin has opened its £10m European distribution centre (EDC) in Stoke-on-Trent in the UK.

The 53,500 sq.m facility, which will also host a national distribution centre (NDC) for Michelin’s tyre service company, ATS Euromaster, has been redeveloped to include 26 loading bays.

Together, the two sites can handle more than 5m tyres annually for the UK and Irish markets.

“This is a game-changing development for Michelin,” said Richard Whitehurst, service to customer manager at Michelin Tyre.

“The decision to share facilities with ATS Euromaster brings natural synergies, and focuses around having one logistical team with one shared vision to support the next steps of both organisations’ growth.”

Michelin has doubled its logistics team to about 150 members of staff, who are now responsible for handling an additional 2m annual tyre movements for ATS Euromaster’s nationwide operations.

Peter Tye, business support director at ATS Euromaster, said: “Our new NDC is a pilot project for the Euromaster Group, increasing our flexibility and enabling us to get the right products to the right centres faster than ever before.”

The launch of the new facility has been planned for two years and involved the implementation of new IT systems and interfaces between Michelin and ATS Euromaster.

A northern Europe customer service division has been added at Stoke-on-Trent to handle about €2m worth of orders per day from countries including the UK, Denmark, Finland, Ireland, Norway and Sweden.

The existing retread manufacturing operation at the site can produce the Michelin Remix and Encore retread tyres on the same production line.

A new 12,000 sq.m warehouse is being being built alongside the retread plant, for storing truck and bus tyre casings ahead of processing.