Minda's journey from desi to dominance

From humble beginnings to a sprawling automotive network, Indian tier one Minda had to learn supply chain quality along the way. 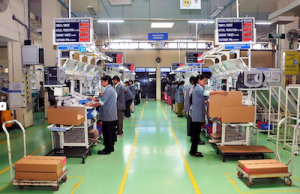 Automotive manufacturers used to build much of their supplies and equipment under their own roof in India. The number of blue and white-collar workers at Premier Automobile, makers of Fiat cars in the country, was around 10,000, while  Hindustan Motors, the former passenger car champion, was no different. Contrary to popular perception, however, it was not Suzuki that introduced the concept of outsourcing in the Indian automotive arena when it set up shop in the early 1980s. As far back as the 1950s, tractor manufacturer TAFE and popular two-wheeler manufacturer Enfield sourced components from outside their manufacturing base.

However, the arrival of Maruti did indeed transform the Indian supply chain, with suppliers subsequently brought in from Japan and across the globe to meet the company’s strict quality standards. In many cases, joint ventures were formed between these Japanese or global suppliers with desi (local Indian) manufacturers to help develop the supply base virtually from scratch. From a closed economy that previously had shortages in almost all commodities, and in which productivity and quality were very foreign concepts, Indian companies slowly learned Japanese practices that included just-in-time logistics, lean inventory and kaizen.

One family of companies whose heritage stretches back to the days of TAFE tractors is NK Minda Group (also known as Uno Minda). The company has humble beginnings as a clothes and component importer in the 1950s, but today it boasts around 7,000 employees across the globe with a group turnover of $500m, including 34 plants in India as well as factories in Vietnam and Indonesia. Uno Minda’s customer base stretches nearly the entire Indian automotive industry, supplying a huge range of commodities, including switches, lamps, safety components, horns, seat belts and electronics.

The Mindas have faced a challenging journey from those early days of outsourcing until now. The family was among several importer-traders belonging to the business-savvy Marwari community, selling tea, timber and clothing. Led by Shadilal Minda (father of current chairman Nirmal Kumar Minda), the company began importing ammeter from Japan back in 1958. It switched its base to Delhi in 1962 and focused on servicing the aftermarket for tractors and motorcycles, gaining acceptance from TAFE and Enfield India. 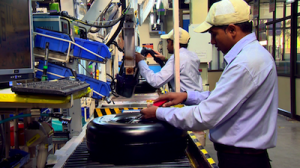 Thirty years later, the Mindas were still supplying to Hindustan Motors and Fiat, but the group had gained a small foothold with emerging giant Maruti Suzuki, with 150 workers trundling out components for the carmaker from a single plant on the outskirts of Delhi. However, following a number of warranty failures, Minda struggled to live up to its principal’s expectation on the quality front.

“Maruti’s quality standards were so high, we were nowhere,” admits the shy, but confident NK Minda. “On a scale of one to ten, where one stands for the lowest and ten the highest, we were possibly at two.”

It is not for nothing that the Marwaris are known for their desire to excel in business. Having sensed the potential to make it big, Minda put the ball back into the Maruti court by requesting that the carmaker help it find a good Japanese partner to learn and grow in the switches category.

The comapny got a positive response from Tokai Rika of Japan, a Toyota Group company specialising in switches and sensors. Suzuki management told Tokai Rika that its Indian success depended on quality lapses being bridged at suppliers like Minda. Long and protracted negotiations led to the creation in 1995 of the first joint venture in India for the manufacture of automotive switches and heater control panels.

What began as a technical collaboration has ended up in equity participation and further partnerships, with 60% control held by the Mindas, 35% by Tokai Rika and 5% by Japan’s Sumitomo. 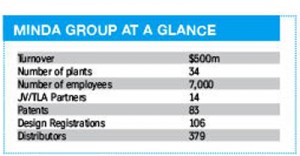 This partnership has been about much more than equity for the Minda Group. The company has undergone a profound cultural change with a huge impact for production and supply chain management across its operations. It is a journey that a number of other Indian companies would follow, although not to the heights that Minda has.

The following of Japanese production systems and methods has since become a core activity for Minda’s joint ventures, including the founding of a fully-fledged training school for employees. “That’s how we learnt what quality means,” says Sanjay Walia, vice-president of corporate marketing. “This focus on the smallest details helped us bridge the quality gap we faced.” To ensure it could maintain Maruti Suzuki’s quality parameters, Minda has also began paying more attention to supply quality from its own suppliers, Walia adds.

Once the Japanese were won over, with their quality culture enshrined in Minda’s DNA, the supplier’s business grew exponentially, with a client list that today includes Tokia Rika, Nagase, Kyoraku, Kosel Aluminium, Toyoda Gosel of Japan, Emer and Faber Industries of Italy, and JBM Group of India.

Minda acknowledges the role played by Maruti at every stage, praising in particular the carmaker’s supplier development programme – Maruti Centre of Excellence (MACE) – which works on many aspects of production and logistics quality with suppliers. “Maruti has done a tremendous job,” says Walia. “It is Maruti who really uplifted the Indian auto component industries with MACE. The cluster approach has been a big positive for India.” 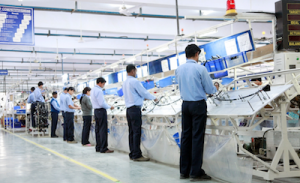 Forced to be innovative

Minda has just not mastered the art and science of manufacturing, according to Walia. Alongside its plants, the company has design centres in Taiwan and Japan. Walia boasts of the company’s 83 patents and 106 pending design registrations. He explains that an innovative automotive supplier should not be tweaking or reverse engineering technology from OEMs, as many suppliers in India are doing. Rather, the supply chain must support innovation at every turn. For Minda, every business line and every product line has its own engineering and R&D division. Engineers in these divisions research down to the tool stage level. To increase accountability, these engineers are responsible up until part validation. A 100-member group is focused on R&D, aided by a 300-strong engineering group.

In many ways, it was economic uncertainty that forced Minda to be more aggressive in engineering, according to NK Minda. After using its plant in Indonesia to reverse engineer parts for several years, Maruti told the supplier that it would need to win business for a new model directly from Japan with its own innovations. “The future looked bleak. Either we create something new or close the factory in Indonesia,” says Walia. “It was a big dilemma, but it forced us to be more creative. That’s when this innovation bug bit us.”

What followed was not only success in serving Maruti, but also in gaining further work with a number of international carmakers, including PSA Peugeot Citroën (although global work depends on agreements with joint venture partners, some of whom restrict the sale of products).

Focusing on the best 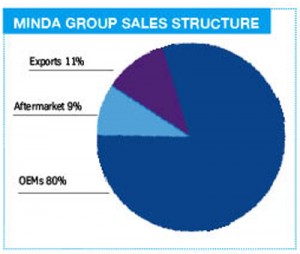 Dealing with quality conscious global automotive giants also taught Minda a lot about working in the global marketplace, including for logistics. On the packaging side, for example, every engineering department now has dedicated engineers concentrating on the most optimal packaging.  “We moved away from supply in cardboard boxes to bins,” says Walia. “Now, we are improving bins by putting partitions into them. In the process, we reduced the component damage.”

Growth, NK Minda believes, need not come via expanding product offerings. Rather than trying to dilute its expertise by developing products for the more than 2,000 components that go in a final vehicle, the company is instead “digesting” about 24 components. “We have no appetite to add more components. Our thrust is to excel in whatever we do and enlarge the share of existing business at home and abroad,” he says.

Indeed, when you look across the Minda Group’s vast automotive offering, one wonders if the company had ever thought to build its own passenger cars. NK Minda concedes that the idea had occured to him. “About seven or eight years ago, we explored and then concluded that this [manufacturing passenger cars] was not our cup of tea. We realised that we are born for manufacturing components. Making cars requires a separate skill set and different kind of network.”

"Nirmal Kumar Minda’s passion to drive excellence and his vision of
becoming global has made Maruti Suzuki’s task very easy to groom this desi company into a truly global one" - Sudam Maitra, Maruti SuzukiHowever, Minda does not rule out inorganic growth in future through the purchase of other tier suppliers – although it is not something the company would rush into.  “Acquisition means difficult integration – culturally, linguistically. So one has to be cautious,” he says.

One good sign for the company’s future is the positive image that its main customer still has of it. Over the past two decades, the evolution of the Minda Group has been tied closely to Maruti Suzuki. Sudam Maitra, chief supply chain officer at the carmaker and one of the architects of the modern Indian supply base, has watched the company’s transformation over the past 23 years. “My current assessment is that Minda Group is moving towards becoming a global company with multiple plants in India and overseas,” he says. “A lot of professionals have been inducted in the management and they have adopted many Japanese practices by learning these very quickly.

“Nirmal Kumar Minda’s passion to drive excellence and his vision of becoming global has made Maruti Suzuki’s task very easy to groom this desi company into a truly global one.”