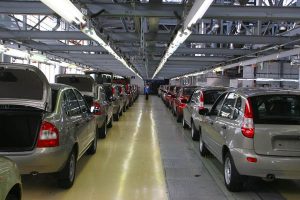 In the first eight months of 2015, Renault exported 9,500 vehicles from Russia, up 20% on the same period in 2014, but vehicle and parts exports from other Renault-Nissan Alliance partners in Russia are lagging, notably Russian carmaker AvtoVaz.

The Renault-Nissan Alliance owns a controlling 74.5% of AvtoVaz, after its purchase back in 2012 of a 67.1% stake in the Russian carmaker’s holding company – Russian state technology conglomerate Rostec.

According to the vice president and chief operating officer of Renault's Eurasia region, Jean-Christophe Kugler, the company has launched the export of tyres from Russia to Romania. There are also components being shipped from the Togliatti plant to Turkey, but these are only Renault parts and not those made by AvtoVaz.

“We have introduced a new position – director of exports – to explore the full potential,” said Kugler. “We mean not only the delivery of finished vehicles, it can be components and parts. It is good for us and for our suppliers, and in order to cover part of the fixed costs that we are facing here [in Russia] all the time.

“However, we are talking only about Renault and we are not talking about AvtoVaz,” he added. “While exports are a new direction for us, we are so far talking about shipments to countries such as Romania, Turkey and Vietnam, but not in Europe.”

In terms of vehicle exports, AvtoVaz had an ambitious target of doubling the volume of deliveries abroad to 100,000 cars per year. Instead, the Russian carmaker could only hit 50,000 cars this year, even lower than the figure for 2014.

Both Renault and AvtoVaz have been affected by currency fluctuations within the Customs Union of Russia, which includes Belarus, Kazakhstan, Kyrgyzstan and Armenia. Devaluation of the Russian ruble resulted in a drop in sales in Kazakhstan of 34% over the first seven months of this year.

"Exports are important for us, but the most correct thing is to do is export in the right way,” said AvtoVaz’s president, Bo Andersson. “In the past, it destroyed our reputation, not improved it. Because if you do not have the correct partners, nothing will help you."

He added that the short-term target for AvtoVaz was to regain its position in the post-Soviet Union regions, including in Ukraine.

At the same time, industry experts have noted that Renault-Nissan and AvtoVaz have not managed to agree on the joint use of distribution centres. Previously, it had been suggested that Renault-Nissan would offer AvtoVaz its distribution network abroad to help the Russian carmaker in cutting logistics spend on export supplies. No progress on this plan has been reached however.

Nissan has so far not managed to launch export supplies.