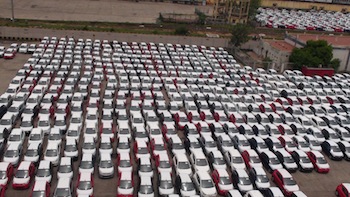 Automotive manufacturers in India are increasingly looking towards short-sea shipping to move finished vehicles around the country.

Hyundai Motor has revealed it is exploring options to move cars north by sea to the east of the country, from its Chennai car plant to the city of Kolkata. It is also seeking to set up similar routes along the west coast.

“Discussions are ongoing for the movement of 500-odd cars. This is a part of the coastal cargo movement plan aimed at decongesting the road network,” said Movva Krishna Babu, acting chairman of Kolkata Port Trust (KoPT) recently.

Details of the route will be firmed up over the next couple of months, he said, including whether vehicles would be offloaded at Haldia or Kolkata docks.

Earlier this year Hyundai announced it had started using short sea coastal services between Chennai and Pipavav, in the north west.

India's indigenous automotive manufacturer, Maruti, is also understood to be looking into a short-sea option for cars built in Gurgaon and Manesar, which would be shipped to Kolkata along the river Ganga. A pilot run was scheduled for October-November 2015, but did not take place as a result of difficulties in finalising the costing.

As reported at the time of the Hyundai announcement, high port fees are dissuading some shipping lines from entering the Indian finished vehicles cabotage market. Nevertheless, Maruti is understood to have restarted negotiations with the Inland Waterways Authority of India (IWAI).

In neighbouring Bangladesh, meanwhile, the recent signing of a coastal shipping agreement with India has prompted Kolkata Port Trust to start cargo operations to ports there. Whether this will include finished vehicles is not yet clear.