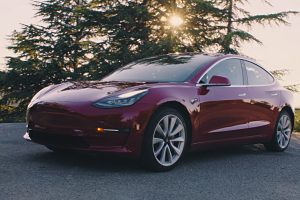 Tesla CEO Elon Musk has admitted the company faces a 'production hell' in ramping up manufacturing rates. Musk was speaking as the OEM delivered the first Model 3 vehicles to customers in a ceremony at its Fremont plant in California last Friday.

“In terms of production, the thing that is going to be the major challenge for us over the next six to nine months is how do we build a huge number of cars,” Musk said. “Frankly, we are going to be in production hell.”

At the same time, he highlighted some of the details of the affordable electric car’s supply chain. Over 10,000 parts inside the Model 3 are sourced from around the world, he said – about two-thirds of these being from North America with the rest coming from a number of other locations worldwide.

“Almost anything that goes wrong, anywhere in the world, if we haven’t buffered the supply chain, it will interrupt the production progress,” he said.

“When you have 10,000 unique items in a vehicle or any object, any one of them can slow down the production process, so the production rate will move as fast as the slowest and least lucky components in the whole mix.”

Musk said the engineering team had worked hard to make the car easier to build than Tesla’s more premium models. “The Model S is an amazing car but it is very hard to build.”

With 50 Model 3s manufactured in July (30 for customers, 20 for engineering validation), the production schedule is set to ramp up exponentially in coming months, to 100 in August, 1,500 in September, and 20,000/month from December.

There are about half a million pre-orders from customers already, and Musk said ordering one now meant a customer would probably only receive it towards the end of next year. In comparison Model S and Model X deliveries would take one or two months.

The company’s Fremont car factory, the second largest footprint building in the world, will ultimately produce half a million Model 3s and about 100,000 combined S and X vehicles a year.

Batteries and drivetrains for the Model 3 will be sourced from the company’s ‘gigafactory’ in Nevada, which, when it reaches full production, will produce more lithium-ion batteries annually than all other battery production globally combined, according to Musk.

The company also plans to triple the size of its supercharger network by the end of next year.