Grimaldi is having a record year, and Christopher Ludwig shows that the Naples-based company’s success is thanks to its strategies for automotive, investment and diversification.

Relative to its general business strategy, 2011 should have been a catastrophe so far for the Naples-based Grimaldi Group. Bunker prices are near record highs, unrest in North Africa and the Middle East has caused disruptions and the Japan earthquake has slowed global production.

Furthermore, several of the group’s important markets are dragging, including Italy, Greece, Spain, Portugal and Ireland. But according to Emanuele Grimaldi, co-chairman of the group and chief of short-sea operations, Grimaldi’s early results for the year are “excellent beyond expectation” and even so good as to be considered “strange”.

Mr Grimaldi reveals that each of the first three months of the year saw increases in profit of at least €10m ($14.6m) more per month compared to 2010, a result that, should it continue, would more than double profits compared to last year when the group had consolidated profits of around €100m from total revenue of about €2.3 billion.

Automotive backbone
Although surprising, the company’s success has more to do with improvements in its core business than it does la fortuna, including growing trade between North and South Europe, rising imports to Russia and other oil-producing countries such as Nigeria and Angola, and deep-sea growth to the Americas. Automotive plays a critical role, Mr Grimaldi says.

“Carmakers are the backbone of our services. For [our Italian companies in] Naples, automotive is the biggest operation, and we are strong with Ford, Fiat and GM,” he says. “Finnlines is also growing tremendously [for automotive].” Part of what has set Grimaldi apart from other vehicle logistics companies and shipping lines has been its diversification. Besides new cars, Grimaldi transports more than 3m passengers a year, moves trailers, fruit, Scandinavian paper and more. Following unrest in the Middle East, it has had its vessels chartered to evacuate citizens.

But automotive underpins the wider Grimaldi network. “Even the new vessels that we are ordering today to transport paper south from Scandinavia have car decks built on them to allow us to be flexible,” says Mr Grimaldi. “Our last six vessels have capacity for 1,000 new cars and more than 2,000 lane metres for ro-ro traffic, including trucks and cargo.”

Naples leads the growth
Although diversified, Grimaldi’s success is not measured out equally across the group. Most of the profit is earned by 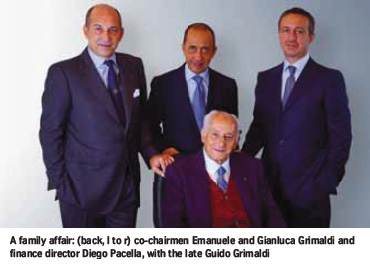 The group has also acquired stock-listed companies, each of which have struggled during the downturn: the Baltic operator Finnlines, deep-sea operator Atlantic Container Lines (ACL) and the Greek ferry operator, Minoan Lines. The Italian companies have a network spanning the Mediterranean, Northern Europe, West Africa and the Americas, moving a mix of vehicles, ro-ro and passengers. Even during the crisis years, when Grimaldi saw €400m in turnover disappear–about 25% of its business–Naples never lost money. Rather, it has always been in “the very serious black,” says Mr Grimaldi. While the Naples companies are private and do not publish financial results, he says they have never had a single quarter of loss in their 50-year history.

Mr Grimaldi credits the success of Naples to the stewardship of his father, Guido Grimaldi, who was chairman until his death last autumn at 92 years old. He points to his upbringing, in which at 14 he worked at shipping agencies in London selling cruises. “Unlike managers that have spent their lives in universities and boardrooms, I learned early how to produce a bill of lading, for example. My father was the same with his uncle the generation before.”

Naples remains a family-run business: Mr Grimaldi’s brother, Gianluca, is co-chairman and responsible for deep sea, while his brother-in-law, Diego Pacella, is finance director. Mr Grimaldi’s son, Guido, is commercial director of the group’s Mediterranean line. But family or not, Mr Grimaldi believes in the core strength of his Naples management. “I must say that even in relation to ACL, Finnlines and Minoan, I believe that we [the Naples companies] are better, and our managers would agree,” he says.

The bottom line for each entity at least partly backs up this claim. In 2010, the three Italian companies had revenues of €1.2 billion, with profits of €192m, earnings almost double that of the group on roughly half the revenue. The profit split across the three was €66m for Grimaldi, €66m for Inarme and €59m for Atlantica. ACL and Finnlines saw losses in 2009, although both turned back to small operating profits in 2010. Minoan Lines lost nearly €40m last year.

This year the Naples core remains the most profitable. ACL is performing well thanks to a stronger Atlantic trade and will improve its profits, says Mr Grimaldi. Finnlines has benefited from imports to Russia, but lost money in the first quarter because of rising costs and stevedoring strikes in the Baltic. Mr Grimaldi nevertheless predicts it will remain profitable this year. Minoan, while improving and outperforming its Greek competitors, continues to struggle. Mr Grimaldi says he has put aside “huge reserves” to weather it through recovery.

But while Mr Grimaldi unabashedly puts Grimaldi’s Neapolitan roots at the heart of the group, he also says that the downturn has strengthened the links between the companies. Since taking the helm at Finnlines during a restructuring, Mr Grimaldi has extended the relationship with that brand’s top management at the paper-producer Stora Enso to other Grimaldi companies. Likewise, the historically strong relationship between ACL and Caterpillar has been broadened to Finnlines and Grimaldi brands. Similarly, Grimaldi’s automotive links with the likes of Ford, Fiat and GM have been better connected to Finnlines and ACL.

Scrap the old, in with the new
Perhaps Grimaldi’s most important strategy has been its investment in vessels and its willingness to scrap older ones. The group has an order book of 25 ships, about half of which have been delivered, with the rest arriving in the next two years. Grimaldi is also in negotiations to buy the world’s five biggest ro-ro vessels to replace ACL’s fleet in 2012 and 2013. Mr Grimaldi points out that all of the new ships are considerably more efficient than the older ships.

In a mark of the company’s cautious management, the growth in net fleet size (currently around 100 ships) will be 4–5% as older ships are scrapped. Mr Grimaldi says that with costs rising and economic and automotive sales uncertain, companies must learn to do more with less, particularly as he believes the ro-ro market still faces overcapacity. “The worst thing is to cannibalise your own business,” he says.

Grimaldi even chose to scrap an 18-year-old vessel rather than pay €2m to repair its engine. His believes operators shouldn’t cling to old vessels with the illusion of saving money. “When you have a 30-year-old vessel, how do you expect to remain competitive in two or three years, especially with the price of oil rising? Even if a light comes at the end of the tunnel [for the economy], it will not be for those ships.”

Protecting profits
Mr Grimaldi has joined other European shipping operators in criticising the pending changes to the emission control areas in the Baltic and Northern Europe, as well as the east coast of North America, which will see sulphur emissions restricted to 1% in 2012 and to 0.1% in 2015. “There are many questions, not least whether oil refineries can even meet the demand for 0.1% sulphur by 2015,” he says. “The shipowner’s association believes that a lot of business will go back to the road, which would be counterproductive to the environment.”

He is sceptical about further emissions trading schemes too, believing that the rising price of oil will drive up efficiency on the technological side of shipping. With bunker prices above $650 per tonne, he questions how the industry could sustain further fees. He points out that Grimaldi consumes about 1.5m tonnes of bunker fuel per year. A levy of $100 per tonne, for example, would cost about $150m per year.

“That represents all of our profit, and we are one of the few companies in this sector with strong results right now,” he says. “This would have to be a cost we pass on to our customers.” But while those battles may still need to be fought, Mr Grimaldi sees a secure future from his office in Naples, much of which he credits to his father, “my greatest teacher”. The figures back him up again: capital reserves–la patrimonio in Italian, o apt given Grimaldi’s family history– have increased from €1.7 billion in 2008 to €2.4 billion last year. The company continues to withhold a dividend, focusing instead on investment. While 2011 will remain difficult, the strength of Naples looks set to continue.