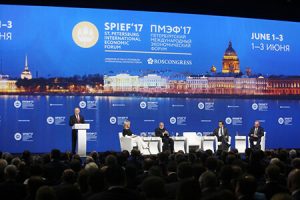 A group of Russian state-owned and private companies has formed a body called the Digital Transport and Logistics Association (DTLA), reported to be the biggest such association to have existed in the Russian transport industry and tasked with establishing a joined up supply chain supported by the latest digital technology.

The set-up of the group was announced at the recent St Petersburg International Economic Forum held on May 24-26.

Among the members of the new association are state-owned organisations Russian Railways (RZD) and Russian Highways (Avtodor), along with Aeroflot, RT-Invest Transport Systems (which manages the road toll collection system in Russia), and a subsidiary of the state run Rostec Corporation which owns a 67% stake in carmaker Avtovaz.

The establishment of DTLA was originally proposed by the Russian Transport Ministry. The current list of its members will be expanded “as Russian major companies from the transport and logistics industry have already expressed their intention to join,” said Eugene Dietrich, director of the development department at the Russian Transport Ministry, at the International Economic Forum.

Dietrich said the DTLA had been set up with the aim of creating a new kind of service for the Russian market, one which would significantly improve the quality and availability of transport services in the country.

The ultimate goal for DTLA is to bring together the capacities of the biggest Russian transport and logistics companies to create “a joint multimodal logistics space all over the country”, said Dietrich.

Supply chains that operate separately are no longer effective and a joint system based on all of them could both cut transport costs across Russia and allow national market regulators to reduce administrative pressure on the industry, said Anton Zamkov, general director for RT-Invest Transport Systems, at the forum.

As a result, it is expected that the establishment of the digital system could create barrier-free transport routes across Russia, said Zamkov.

Work on a joint digital supply system has already been started among the DTLA members. Eugene Charkin, director of the information technologies department at RZD, said the rail provider had launched an on-line trade platform for cargo deliveries by rail in Russia. In the short term, it plans to integrate that with automotive transport. In future, warehouses and several other systems could be also integrated into the platform, said Charkin.

While further details have yet to be revealed, it is expected the joint system within DTLA would work with all kind of goods, including finished vehicles and automotive components. Charkin said the system had the potential to incorporate Russia’s Global Navigation Satellite System (GLONASS), as well as the Platon Electronic Toll Collection system.

Viktor Parahin, spokesperson for the Russian state-owned company ZIT, forecast that the launch of the new system would lead to a strong rise in volumes of both internal and transit transport in Russia. The authorities plan to actively participate in that project alongside private business, he said.

In future, the joint digital supply chain established within the DTLA should be operating with the most advanced technological systems, including blockchain and digital intelligence, Parahin added.