No deal Brexit would increase cost of EVs by £2,800, says SMMT

The UK’s Society of Motor Manufacturers and Traders (SMMT) has warned that a no deal Brexit could push up the cost of buying an imported battery electric vehicle (BEV) in the UK by £2,800 ($3,600). Two thirds of all BEVs on sale in the UK are imported from Europe and between January and September this year 40.8% of all the new BEVs registered on UK roads came from the EU, more than from any other territory.

Resorting to World Trade Organisation (WTO) tariffs of 10% would also add £2,000 ($2600) to the average cost of a UK-built electric car sold in Europe, damaging the UK’s competitiveness as a producer of electric vehicles. The EU accounts for more than half of all vehicle exports from the UK (54.8%). 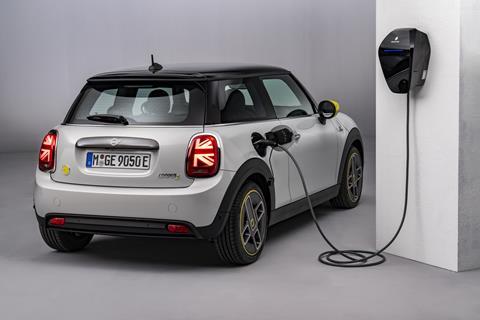 The Mini hatchback, including the electric version, is produced in Oxford

“No deal would be the worst possible outcome for UK Automotive, for car buyers and for the country’s ambitions to become a world leader in transport decarbonisation,” said the SMMT in a statement. “The immediate imposition of blanket tariffs under WTO rules would add billions to the cost of trade and, crucially, to the cost of building and buying electric vehicles.”

More specifically, WTO tariffs would add at least £4.5 billion to the annual cost of fully-assembled cars traded between the UK and EU, according to data from the SMMT.

Furthermore, it said the increase in price would negate the maximum £3,000 plug-in discount awarded by the UK government for low-emission vehicles. That grant applies to vehicles that have CO2 emissions lower than 50g/km and can travel for at least 112km (70 miles) without any emissions at all.

The SMMT estimates that the increase in price could reduce the demand for BEVs next year by at least 20%. The UK is expected to register approximately 78,000 BEVs this year, with a further increase in 2021.

“Just as the automotive industry is accelerating the introduction of the latest electrified vehicles, it faces the double whammy of a coronavirus second wave and the possibility of leaving the EU without a deal,” said Mike Hawes, chief executive of the SMMT. “As these figures show, ‘no deal’ tariffs will put the brakes on the UK’s green recovery, hampering progress towards net zero and threatening the future of the UK industry.”

Hawes said the UK government needed to secure a tariff-free trade deal, recognise the importance of batteries in future vehicle production and ensure consumers had a choice in buying zero emission models.

“We urge all parties to re-engage in talks and reach agreement without delay,” he said.

There are fewer than four weeks left to secure a trade deal if it is to be ratified in Parliament ahead of the Brexit deadline on December 31.