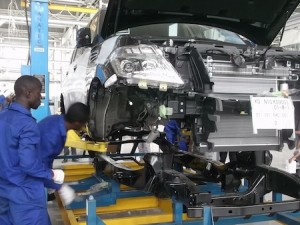 Nissan has become the first major carmaker to assemble passenger vehicles in Nigeria, following the start of production at the joint venture plant the Renault-Nissan Alliance has with West African conglomerate Stallion Group, in the capital Lagos.

The first vehicle off the assembly line was a Nissan Patrol. The carmaker also plans to produce the Almera and NP300 from this month and will implement mass production in August.

Nissan said it is aiming to double sales in Africa by 2016 to around 220,000 and is targeting significant growth there as part of its commitment to reach 8% profitability by the end of that year.

The move to assemble cars locally in the country follows the introduction by the Nigerian government of a new automotive industry development plan in October last year. The plan is aimed at establishing a domestic automotive sector by offering companies incentives for local production. These include the granting of ‘Pioneer Status’, which affords a five-year tax break for carmakers setting up anywhere in the country and a seven-year break for those setting up in economically disadvantaged areas. They also include a tax reduction of 20% on investments in infrastructure, including roads.

“Demand for cars is growing quickly in African markets as demonstrated by the first model being produced a mere seven months after the announcement of the new automotive policy,” said Takashi Hata, Nissan senior vice president and chairman for the Africa, Middle East and India. “By acting quickly to begin production in Nigeria we are securing for ourselves first-mover advantage."

The automotive plan is part of the wider five-year Nigerian Industrial Revolution Plan designed to diversify the country’s economy and increase the contribution manufacturing makes to the GDP to more than 10% by 2017.

High tax on vehicle imports
Another driver for local production is the fact that the automotive part of the strategy also includes the establishment of a 70% fee on all imported passenger vehicles. This is made up of a 35% levy and a 35% additional duty. It will be dropped to 55% in 2019. Finished commercial vehicles will only be subject to a 35% fee. Complete knockdown (CKD) kit imports for assembly in Nigeria will have no tariff against their import but semi knockdowns (SKDs) will be charged at 5% and 10% depending on whether the car body is fully painted and glazed. A final measure appears to stipulate that manufacturers can import vehicles at a reduced 55% levy as long as they import volumes equal to twice their imported CKD/SKD kits.

"The main element of the incentive structure is that a duty reduction (equal to prior NAC introduction) will be applied to CBU vehicles of an automotive assembler at a ratio of two times that of locally assembled vehicles," confirmed a spokesperson for Nissan.

The revenue generated from the levy on imports will be used for the development supplier parks and an affordable vehicle-financing scheme, according to details of the plan published by the NAC.

The government said that rather than curtailing the import of affordable vehicles – Nigeria imported 300,000 used vehicles in 2012 – the automotive development plan is designed to promote the domestic production of them. In addition to the used vehicles it imported in 2012, it also took in 100,000 new ones (both including commercial vehicles), amounting to N550 billion naira ($3.45 billion). The NAC paper states that the potential value behind the local assembly of those imports amounts to N100 billion naira.

“We are grateful to the Nigerian government for implementing automotive legislation that is conducive to investment and that was instrumental in our decision to open an assembly plant in partnership with the Stallion Group, already our exclusive distributor in Nigeria," said Nissan South Africa’s managing director Mike Whitfield, who also heads up Nissan's Sub Sahara Africa region.

The policy is already drawing other carmakers to the country. Toyota has plans to establish a facility there, as do India’s Tata and TVS Motor, which have held meetings with the NAC to that effect. Kia has also recently signed a deal with Dana Motors to set up a facility in the next two years.