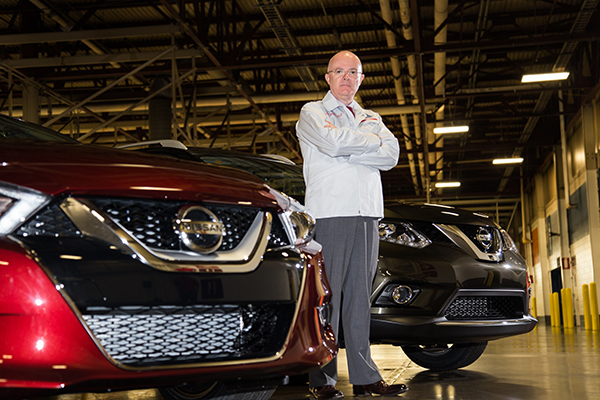 When John Martin (left) declares Nissan’s North American operations and supply chain as the most competitive, he speaks as a global citizen for Nissan. After holding production and supply chain leadership roles across the UK, Europe, North America and at Nissan’s headquarters in Yokohama, Japan, Martin has seen many sides of the OEM’s value chain and has done the benchmarking to back his claims.

That includes a prior tour in the US when Martin was vice-president of supply chain management from 2007 to 2009. During that time, he helped forge an integrated supply chain department for the region, which has responsibility across all areas of North American supply and order processes, inbound, outbound and spare parts logistics, as well as in-plant material handling.

Mike Steck, vice-president of supply chain management, has led the department since Martin left, and has considerable experience in production and industrial engineering, material handling as well as human resources. Steck has regional oversight for the sales and operational planning process, production planning and control, logistics and aftersales supply.

Supporting Steck is senior director Chris Styles, who has worked across the supply chain and in purchasing, including in Mexico. Styles manages logistics of production parts, export parts, aftersales parts and vehicles for the region.

"I’ve seen the importance of having a strong regional function that allows for cross-regional benchmarking and performance comparison. That has to go together with a high degree of delegation to the management on the ground. I believe that is where we differ from other Japanese brands." - John Martin, Nissan North America

This department is part of a global and regional benchmarking approach, as supply chain management is a function across other regions for Renault and Nissan. It is also combined within the Alliance at a global level, mixing decentralised responsibilities with an international basis for comparison.

“I’ve seen the importance of having a strong regional function that allows for cross-regional benchmarking and performance comparison,” says Martin. “That has to go together with a high degree of delegation to the management on the ground. I believe that is where we differ from other Japanese brands.”

Along with benchmarking manufacturing and supply chain at a global level, Martin has gained a reputation at Nissan for increasing volume quickly, and managing difficult vehicle launches – both tasks that have been important in North America. Following the aftermath of the Japanese earthquake in 2011, for example, he was at the fore of the carmaker’s production recovery. He created a central communication team in Japan, built from representatives of global plants, that helped coordinate supply shortages. Nissan recovered faster than most OEMs, having lost around 270,000 units of production globally, while other Japanese OEMs lost 1m units or more each. Martin received the Nissan President’s Prize for Outstanding Executive Contribution for his leadership during this period.

During his most recent tenure as head of production, supply chain management and purchasing in Europe, Martin also oversaw several important launches, especially at Nissan’s plant in Sunderland, in the north-east of England, the UK’s largest assembly plant. These included the Nissan Note, the all-electric LEAF and, most importantly, the second generation Qashqai crossover, a model related to the Rogue. The European market also foreshadowed shifts Nissan would see in the US, including the rise of crossovers – a segment that Qashqai helped to redefine – and near-premium levels of options and part variety. By the time Martin left, Sunderland had been selected to build the first Infiniti model in Europe, the Q30, which is, like the model that Nissan will build in Mexico, on a Daimler platform.