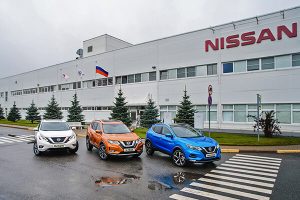 Given low forecast sales on the domestic Russian market, however, this may depend on increasing exports to adjacent markets, he admitted.

Nissan manufactured 56,500 vehicles at St Petersburg in 2018, 23% up on the previous year and the highest annual total since the plant opened 10 years ago, Boitsov told local think-tank the Russian Business Consulting Agency recently.

This month, the company began assembling the new Qashqai at St Petersburg, after starting production of the X-Trail there in October last year. The addition of these models was a big step for the company and there are hopes this will further increase overall sales, said Boitsov.

Despite last year’s increase in production output, the plant is still operating well below capacity. It is designed to make around 100,000 vehicles a year and has a sufficiently flexible production set-up to do just that if sales rise, said Boitsov. But the Association of European Businesses (AEB) has estimated that vehicle sales in Russia will increase by just 3.5% this year, making any substantial increase in production at St Petersburg based on the domestic market unlikely.

Expanding exportsNissan exported 5,747 vehicles from Russia last year, 50% up on the previous year, mainly to Belarus and Kazakhstan. The carmaker wants to expand exports, including to new markets, but this requires support from the government to develop adequate infrastructure, said Boitsov.

Nissan is also developing automotive component exports from Russia. In 2018, the carmaker supplied 17,000 bumpers for the Nissan X-Trail to its central distribution warehouse in Europe. Other components are being exported directly to Nissan’s assembly plants in Europe. For example, as of late 2018, the carmaker has exported 930,000 sound-proofing units to plants elsewhere.

Nissan is part of the Alliance with Renault and Avtovaz in Russia and as such, the average part localisation rate in its vehicles is almost 64%, Boitsov suggested. The Russian government wants this figure to rise to support local tier suppliers, a goal shared by the carmakers who want to protect themselves from currency fluctuations.

Boitsov did not comment on the terms of the special investment contract (Spic) the OEM signed recently with the Russian government. Maxim Meiksin, a spokesperson for St Petersburg’s government, previously revealed that Nissan planned to invest 12 billion roubles ($200m) in expanding production and increasing localisation under the contract, however.

One of the key targets of the new state support programme is to promote export of products made in Russia worldwide and companies signing Spics with the Russian authorities stand to benefit from 0% tax rates.