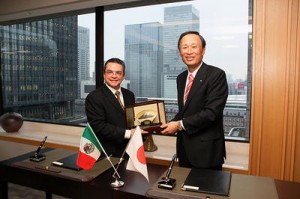 NYK has taken 30% ownership of Mexican finished vehicle logistics provider, CSI Group (Consorcio de Servicios Internacionales). NYK will be providing inland logistics and ocean services in cooperation with the company. The Mexican provider, which was established in 2005, provides inland haulage for vehicles as well as port terminal services including loading/unloading, PDI and customs clearance. It is providing port services at Veracruz, near which it has a vehicle distribution centre.

A signing ceremony was held earlier this month at the NYK head office in Tokyo and attended by Leon Antonio Flores Elizondo, CEO of the CSI Group, and NYK president Yasumi Kudo (pictured), among others.

As has been well documented, the rise in assembly and the export of vehicle volumes from Mexico to the rest of North America and other export markets is well underway, with new carmakers announcing plans for production in the country happening on an almost monthly basis. Kia Motors is the latest company to make the move, with an official announcement on plans for its new facility in Monterrey expected shortly.

(See the forthcoming editions of Automotive Logistics and Finished Vehicle Logistics magazines for extensive coverage of the Mexican market).

In addition, domestic sales are contributing to the country's strong economic performance and are expected to grow in the future.

NYK said it will attempt to accommodate that strong demand by providing logistics services that include inland logistics and ocean transport in cooperation with CSI.

Last week the company announced that its Yusen Logistics division is expanding its multimodal cross-border services between the US and Mexico.