NYK not afraid to go local for logistics

NYK Auto Logistics is that rarest of things: a finished vehicle logistics provider with a strategy scope and asset base that stretches into many different countries, including difficult emerging markets. But can it combine its myriad services effectively? 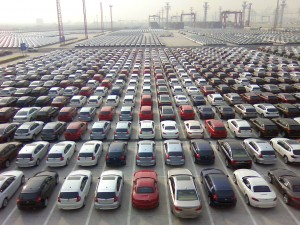 An NYK ro-ro terminal in Shanghai

With the exception of ro-ro shipping, vehicle logistics companies tend to operate in national or regional networks. Much of the sector remains driven by ownership or control of transport assets, with companies rooted to local trucking fleets, rail wagons or terminal operations. Transport and labour laws tend to reinforce this: even neighbouring countries in the European Union require a country-by-country organisation, as local regulations restrict the movement of vehicles and drivers registered in other member states. In North America, 20 years of a free trade agreement has yet to eliminate the need most of the time to switch rail crews or trucks at the US-Mexican border.

If vehicle logistics operators are put off from expanding to neighbouring countries, global and transcontinental footprints are even rarer. China and many Southeast Asian countries have complex restrictions that tend to encourage joint ventures with domestic logistics companies, for example. Some markets, like Brazil, already have highly consolidated road transport markets that are tough for newcomers to break into. Port operations can also be tricky, especially where local government might restrict foreign investment or operations.

Some companies have expanded in spite of these hurdles, whether through joint ventures, acquiring companies or incorporating their own local operations. One notable example over the past decade has been the NYK Auto Logistics Group, the third party logistics arm of Japanese shipping and logistics group, NYK. The provider has developed a diversity of services in vehicle logistics and, to a lesser extent, automotive parts, with a strong focus on emerging markets. It currently has more than 15 vehicle terminal operations in ports or inland facilities, including in Europe, Russia, China and Thailand. NYK also has expanded inland services to countries such as Indonesia, India, China, Malaysia, the Philippines and Russia.

NYK Auto Logistics benefits from the scale of its parent company, which is projecting revenue of ¥2.2 trillion ($21.5 billion) for the current fiscal year. While the NYK Group’s core services are ocean transport – including one of the world’s largest deep-sea car carrier fleets – logistics is now more than 18% of revenue, with terminal services another 7%.

It is not just financial capital but also NYK’s global shipping network that has driven the globalisation of NYK Auto Logistics, with deep-sea services connecting regional ro-ro networks, terminal services such as pre-delivery inspection (PDI) and inland transport. Takaya Soga, general manager of NYK Line’s Auto Logistics Group, points to the advantages of integrating such services, and the tendency among some OEMs to consolidate services. 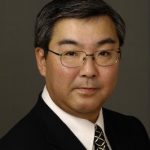 “For example, the Volkswagen Group and BMW are each looking to centralise their control over several of their facilities. We are trying to provide links among these facilities,” he explains.

Soga also acknowledges the difficulties in making these links, particularly where there may be asset or driver shortages, or a lack of multimodal transport. But NYK seems to be further ahead than most in offering something like a global service with common characteristics.

Joining the dots at sea

In many ways the heart of NYK Auto Logistics’ vehicle services is its network of ro-ro terminals in Europe, Russia and Asia, which serve as point for various services to be combined. Good examples are found at the ports of Zeebrugge and Antwerp in Belgium, where NYK’s ICO subsidiary runs a range of processing and handling services. Imports and exports to and from Europe move through the terminals in transhipment, including to Russia, the Middle East and deep-sea destinations. United European Car Carriers (UECC), a short-sea shipping line owned 50% by NYK, connects Zeebrugge to destinations across Europe and Turkey. 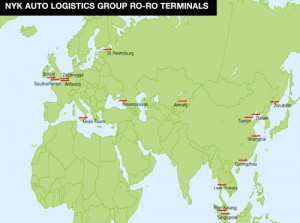 The company is pushing this comprehensive coverage in other regions. NYK has invested heavily in shipping, port and inland services in China, for example, its fastest growing market. After adding a new terminal to the Shanghai Haitong International Automotive Terminal complex in August 2011, NYK has terminals at four of the country’s major ports, including Dalian, Tianjin and Guangzhou. One of its regional ro-ro joint ventures, NYKCOS, also moves exports out of China.

Russia and Central Asia are also important markets for the company. In 2012, NYK bought a controlling stake in Rolf SCS, the logistics arm of the Rolf Group, resulting in a joint venture that includes terminals in the port of St Petersburg and the Far East port of Zarubino, along with inland facilities such Lobnya, near Moscow. 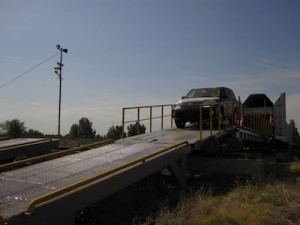 NYK serves its Kazakh terminal in Almaty by rail from points in Moscow, the Russian Far East, and China

In January this year NYK Auto Logistics also took full ownership of an inland terminal in Almaty, Kazakhstan, where it previously held a 25% stake in the local operator, Tranco. NYK serves Almaty by rail from points in Moscow, Russia’s Far East, and China. From there, it provides inland distribution in Kazakhstan, which is also a member of a customs union with Russia and Belarus.

“Kazakhstan is experiencing double-digit growth,” says Soga. “Whereas the primary demand used to be for second-hand vehicles, now it is for new vehicles.” 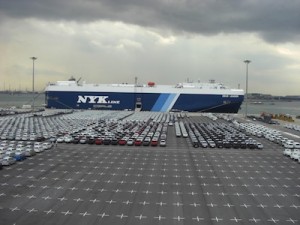 NYK's ro-ro terminal in Singapore is an important hub in Southeast Asia
Some of the company’s fastest growing terminals are in Southeast Asia, including Singapore and the port of Laem Chabang, Thailand. NYK has followed its customers’ expansion in the region, particularly Japanese carmakers. Mitsubishi Motors, one of NYK’s global customers, now exports more vehicles from Thailand than it does from Japan, for example. NYK is expanding value-added services in the region, such as managing exports out of Thailand, including to the Philippines and Indonesia, and carrying out PDI. “In Thailand, we provide transportation from the factory to the port of export and then ship to the port of Manila [Philippines], where we provide an advanced level of PDI services,” says Soga. “We want to transplant this business model to Indonesia, where dealerships are currently providing PDI.”
These services can connect to the NYK Group’s regional shipping network. For example, the group has a joint venture in Malaysia, Straits Auto Logistics, which moves vehicles from Thailand to Malaysia and other countries in the region, and has recently expanded its fleet. NYK also has a joint venture in Indonesia for domestic ro-ro shipping. 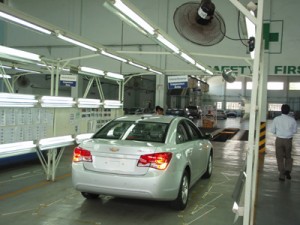 NYK carries out an advanced level of PDI in the Philippines

Indonesia is considered the market with the most growth potential. While Thailand remains the regional production powerhouse at around 2.5m units per year, Indonesia now has similar levels of new vehicle sales to Thailand. Last year its passenger and commercial vehicle sales rose about 10% to nearly 1.3m passenger and commercial vehicles, according to the Indonesian automotive association, Gaikindo. Production increased by a similar amount to 1.2m units. The country also has a brisk vehicle trade: imports rose 23% in 2013 to 154,000 vehicles, with exports steady at 171,000, of which about 80% were by Toyota.

In response to this growth, NYK launched a joint venture earlier this year with Jakarta-based PT Puninar Jaya. The new company, NYK Puninar Auto Logistics Indonesia, offers door-to-door logistics services for vehicles shipped to and from Indonesia. According to Soga, NYK chose Puninar Jaya because of its experience in the Indonesian logistics market and its strong land and equipment assets.

To own or not to own?

NYK Auto Logistics has an asset base in trucks and terminals that stretches from Thailand to Belgium. Soga sees owning assets not only as a way to gain important footholds in a market, but also to maintain quality standards. Further investment in assets is a must, he says.

“For us, quality means keeping our own control and our own assets,” he says. “Outsourcing makes this more difficult – particularly when the service level is an issue.”

But there are risks with any asset-heavy business, and Soga admits that ownership is not always the best solution. He points to 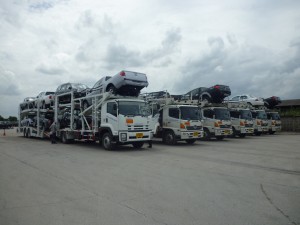 NYK owns 90% of its fleet in Thailand, a ratio that Soga believes should be reduced

driver shortages across Europe, Thailand and China that would wrong-foot further truck investments. Meanwhile, political issues in Thailand have hurt domestic sales, putting pressure on rates and costs for the company’s asset fleet. NYK oversees a fleet of 150 trailers in the country, of which it owns 90%.“We need to reduce our ownership of these assets, because driver shortage is an issue,” says Soga.

Managing assets to their highest utilisation is essential to NYK, and to do so the company has looked to global technology solutions. It uses barcodes or RFID labels as a means of tracking its vehicle movements within terminals or yards; its yard management system also provides instructions to park at a specific points based on the quickest loading.

“We have implemented our patented GPS tracking devices and technology that pinpoints a vehicle’s position to within 1.5 metres,” says Soga. “The GPS sends the information to a smartphone. The typical GPS range is three metres, which could be two cars, so our system is much more accurate.”

Thus far, the system has been rolled out in Japan and Thailand, improving quality, costs, yard capacity and labour productivity, says Soga. Such operational efficiencies will be important in helping NYK Auto Logistics to sweat its global assets, particularly as it expands further.

In the next step, the company points to the need to further develop value-added services in regions, including PDI and inspection in places like Indonesia. However, Soga identifies the importance of improving the links between group services – whether at sea, port or inland – as most critical. NYK has already shown, more than most outbound providers, that it will invest in local equipment and companies – putting its assets where its mouth is. But it must ensure that for customers using different NYK services or entities to move from one region to another, or off mode and onto another, the transition must be seamless.