OEMs could share single system for import and export logistics 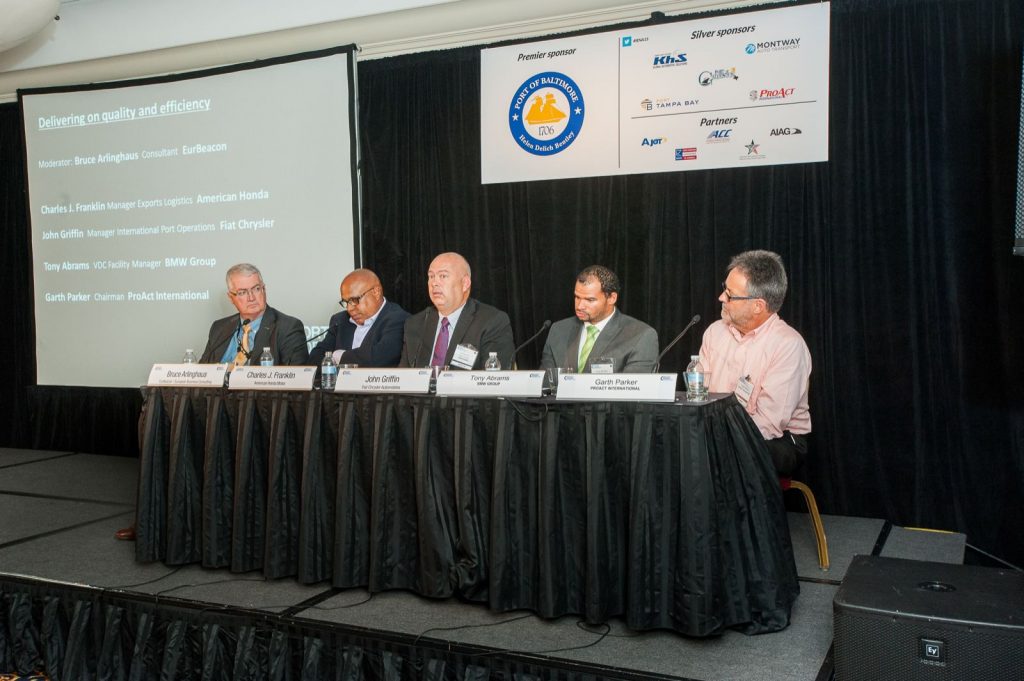 Carmakers already share numerous resources: they use the same ships, the same port terminals, the same infrastructure and logistics providers. However, should they be sharing more? Speakers at this year’s Import Export North America conference in Baltimore raised the idea that carmakers could put considerable amounts of data – from damage reporting to transport schedules – into a shared IT resource for vehicle imports and exports.

But while there was perhaps a surprising amount of enthusiasm for the idea, the practicalities of moving ahead with it may be less clear.

Charles Franklin, who is responsible for export logistics across North American plants for Honda, proposed that it would make sense if every OEM worked on a common platform to monitor imports and exports, so all companies involved can see where a vehicle is, and common data and damage reporting could exist globally.

While a combined system for all OEMs may be a bit of a pipe dream, other executives agreed that it would be useful and feasible for OEMs to be able to share information with other companies involved in their operations “A lot of times my cargo and other OEM cargo is on the same vessel,” said Tony Abrams, VDC Facility Manager at BMW of North America. “We should have some common knowledge, but that all comes down to communication and the port processor – it’s a crucial part of the business in terms of imports and exports.”

John Griffin, manager of international port operations at Fiat Chrysler Automobiles, said there were already precedents, such as airport ticketing systems. “The system is utilised by competing companies but they see the need to work together in one system. When we talk about stink bugs in the automotive industry, it’s something that requires help from other parties and several OEMs. Having a ‘one system’ resource could strengthen our business case when it comes to dealing with customs in other countries for example,” he said.

There would be difficulties to iron out. Charles Franklin suggested that common standards would need to be established across data, since different countries have different requirements on issues such as damage.

Garth Parker, chairman of ProAct, a supply chain software company, acknowledged that establishing cohesion across companies would be difficult, but he also said that there are currently a lot of duplicated systems in the automotive market. “There’s a lot of data around that could be used and interpreted. It would be a goldmine if you could collate it.”

Griffin said that there is a tendency to have secrecy, but that there isn’t really an advantage to it. “If you’re moving vehicles, the information is already in the public. Collaboration is an opportunity, not a risk from a company standpoint. Utilising the same standards and equipment, that kind of collaboration is a good opportunity for us in that respect,” he said.

However, while there was much talk of collaboration, it actually happening is another matter. Bruce Arlinghaus, an industry consultant, questioned just how open OEMs would really be with one another. “Would OEM’s supply chain efficiency and quality data seen by other OEMs? I imagine OEMs wouldn’t necessarily want to share best practices.”

John MacGregor, president of logistics facilities specialist TransDevelopment Group, said that simple database standards would be a good start, and that there had already been some success in billing systems. But he was also sceptical. “You can have a good idea at a logistics conference, but moving it along can be difficult.”

From a software perspective, such collaboration would be possible, according to Garth Parker, but it would have to be managed by an unbiased third party to have any success. Finding that neutral partner would be the tricky part.