PSA’s partnership of choice with Gefco aims to reap benefits in purchasing, pooling and packaging innovation, as well as bringing further intermodal options

Bringing a deeper commercial view into the supply chain group has not been the only cultural shift that Francesca Gamboni is promoting across her teams; in renewing its contract with Gefco as its primary provider, she wants to strengthen the spirit of cooperation with the provider and other suppliers, while encouraging broader collaboration in the automotive supply chain.

When PSA sold the majority of its shares in Gefco (it still owns 25%) to Russian Railways in 2012, it signed a commercial contract with the provider for the first time, which included a five-year exclusivity clause. In signing a new contract, Gamboni says that the carmaker considered all options, including working with multiple providers and switching to a more commodity focused, lane-by-lane approach to sourcing logistics, as she has seen at other manufacturers.

Instead, it elected to keep Gefco as its primary logistics provider. Depending on market or trades, Gefco could use its own transport assets (as in France and other parts of western Europe), while more broadly it keeps its role as third-party logistics integrator and engineer. In a new feature of the contract, it acts as a fourth-party provider (4PL) in some markets, with open-book management and tenders across an array of providers – including its own, separately run 3PL operations.

While the contract does not cover joint venture operations, which award business independently, it does include the option for Gefco to manage logistics in new markets where it is able to provide resources and services competitively.

Gamboni has enough experience to recognise the difference between having a provider like Gefco or not, and she sees both the up- and downsides to it. She recalls logistics sourcing models where the target was the lowest cost per mile and admits that in some cases they might work out less expensive than an exclusive partnership; however, a focus on obtaining the lowest cost for every move brings with it a lot of effort – and higher risks of disruption.

“I don’t know whether having a dedicated partner really works out cheaper in every case, because there are trade-offs,” she says. “But what that partner can save you from is hard to measure in a purchasing budget, such as avoiding stoppages or slowdowns when you face strikes, weather or supplier issues.”

Gefco, she says, is available constantly, whether during weekends, holidays or emergencies, and always with senior management attention. “I have never heard of an issue in terms of quality of service with Gefco. The emergency logistics spend is very low, almost non-existent.” 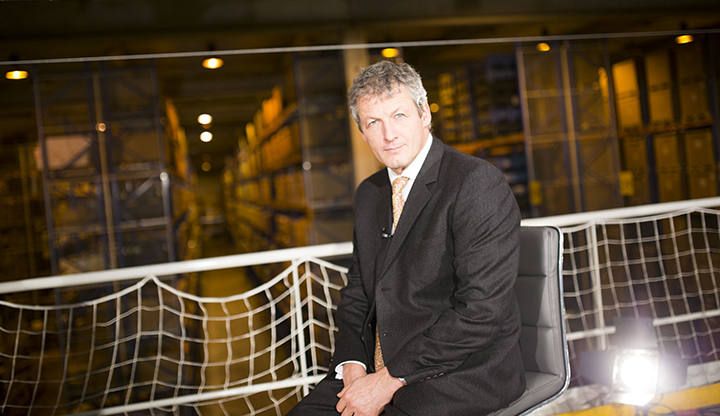 Luc Nadal says that Gefco has refocused its business to concentrate more on deeper, more complex partnerships and operations, with its new PSA contract the best example

For Luc Nadal, the agreement is confirmation that Gefco should remain focused on quality of service. “It is a trade-off at manufacturers between the cheapest price daily, but with a big internal burden of securing capacity and with a certain level of disruption likely, versus a fair price and 100% quality,” he says. “My bet for the future is that we have chosen a win-win for both players.”

In making this ‘bet’, Gamboni wants to elevate performance together with Gefco as part of PSA benchmarking. She points to benefits in pooling resources and purchasing power – including Gefco’s procurement of services for other customers – as competitive levers. But while economies of scale are important, the cooperation should be deeper than that. “This exclusive agreement allows each actor to focus on the implementation of joint action plans to improve quality, reduce costs and make this relationship a real competitive advantage,” she says.

For example, the companies agreed there would be value in dedicating resources to looking beyond the day-to-day business. The new logistics innovation laboratory, which was started at the end of 2016, is a full-time entity based in Paris composed of PSA and Gefco managers who study new ideas and how to implement them. For example, it held a workshop earlier this year on outbound logistics together with managers across both companies and external experts. The workshop generated more than 360 ideas for the lab to study.

“We invited people to challenge us. The ideas were ‘out of the box’ – not all of them will be applicable, but they will all be considered,” says Gamboni. “They focus on optimising PSA’s cost and improving Gefco’s business, as well as improving mutual processes.”

Looking for logistics improvementsPSA and Gefco will also focus on more traditional improvements, including transport network design. While Gamboni thinks the company’s inbound logistics operations are competitive, she sees opportunities for re-engineering. PSA and Gefco are currently working on a plan to improve the density of supplier clusters, for example, as well as a new transport architecture design with more consolidation hubs. The network design will be applied first in Europe, with the aim of improving collection frequency at suppliers and increasing full truckload rates and loading to factories.

Packaging is another “huge area for improvement”, she says. PSA already has a policy of using returnable packaging; it owns some equipment and rents small boxes from Gefco, which manages the container pool. However, Gamboni wants to reduce equipment loss, including through better track-and-trace technology, as well as by reducing transport loops where possible.She also hopes to minimise bespoke packaging investments by improving parts design to fit in more standard packaging. “In short, we want to increase carry-over and fill rates, and use more of what we have,” she says.

“Together with Gefco, in the framework of our environmental policy, we are studying all opportunities to substitute road by rail, but haven’t really found any economics to it yet [for parts and material].” - Francesca Gamboni, Groupe PSA

PSA and Gefco are currently at work on a number of specific projects aimed at increasing shipments by rail and sea, part of overall objectives to use more environmentally friendly modes of transport, says Gamboni. Outbound, the carmaker already uses as a high ratio of multimodal transport: last year, rail represented about 15% of global finished vehicle transport volume, while sea was 21%.

The largest concentration of multimodal is in Europe, where Gefco and PSA have increased both modes. In 2015, PSA increased the frequency of a shuttle between the ports of Saint-Nazaire in France and Vigo in Spain from two to three rotations per week, equivalent to eliminating 5,600 truck journeys and a saving of 7,000 tonnes of CO2.

Last year, the carmaker launched a number of new rail lines for finished vehicles, increasing the number of vehicles transported by train to around 700,000 units (almost all of them in Europe). “That allowed us to reduce CO2 emissions by 10,000 tonnes, or about 17% of our total CO2 [for outbound],” says Gamboni.

According to Luc Nadal, the increase in PSA cars moved by rail has helped make Gefco the second largest overall customer for SNCF, the French national railway. He credits this improvement to PSA’s willingness to “play the game”, including being flexible and patient in building block trains, and paying the appropriate price.

For moving parts and material, rail is a more difficult proposition for PSA, which currently has no active services. “Together with Gefco, in the framework of our environmental policy, we are studying all opportunities to substitute road by rail, but haven’t really found any economics to it yet [for parts and material],” says Gamboni. “This is reviewed regularly in our midterm plans, based on the projected volume for each sourcing area.”

Gefco runs material rail routes for other customers, including for Opel flows between Spain and Germany. However, in most cases buying single wagonloads for rail isn’t cost- or time-effective for carmakers. Putting together an entire block train, meanwhile, requires too much time and inventory. “When you move a block train, that would mean 40 containers or more that might arrive at a plant on one day, and then nothing for several days,” says Luc Nadal. “OEMs typically want daily delivery to maintain low inventory levels.”

Gefco has carried out numerous studies in PSA’s current network, including the potential of moving parts by rail from France and western Europe to PSA’s joint-venture plant with Toyota in Trnava, Slovakia. “However, we found that it would deliver too many components at once to the plant, and we didn’t recommend that our customers use it,” says Nadal. “Inventory costs would have risen, while delays to the train could have also caused big problems.”

Prior to the decline of the Russian market, Gefco ran as many as eight trains per week moving semi-knockdown kits from France to Moscow for PSA’s plant in Kaluga. With the steady delivery and production volume, the plant yard didn’t pile up with containers, but as volumes declined, so too did the business case for the train, and Gefco switched to trucking in 2014.

A potential material rail project for PSA and Gefco could be the 11,000km Eurasian rail service between Duisburg, Germany and Chongqing, China. Gefco, thanks in part to its Russian Railways shareholder, is an important forwarder on the service. PSA, which has factories in central China including in Wuhan and Chengdu with Dongfeng, is not yet a regular user, but is considering it for some express services.

“Use of the China-Europe Express Train line offers an alternative to air transport for urgent shipments to China,” says Gamboni. “In 2015, [PSA sent] containers of gearboxes from Valenciennes [France] via this rail link to Wuhan.”

A time to come togetherFrancesca Gamboni has put out the word to Gefco, and she wants others to know, that PSA is more open to working collaboratively in the supply chain than ever before – not only with Opel/Vauxhall as the brands join the group, but others.

“I believe a lot more can be done with collaboration, as I don’t believe that carmakers compete for customers over having good transport or inbound logistics,” she says. “If PSA and another OEM find synergies, and we can reduce cost and pollution by reducing truckloads or adding more rail, then I think we have done a good job.”

Indeed, Luc Nadal suggests that the way to increase rail transport, particularly for materials, would be to combine different manufacturers on the same block train. It’s an approach that Gefco encourages across its customers, including with PSA where possible. The scope for such services could increase with PSA’s Opel acquisition; for example, both OEMs have plants in Spain and central Europe.

Such potential with Opel will be explored, however Gamboni calls collaboration through acquisition “the easy way”. She is also interested in working with other carmakers and suppliers, or even other industries.

For PSA’s supply chain group, increased sharing starts with information and data, including the commercial forecast and production plans for which it is now responsible. “This is the way to form real supply chain networks, sharing planning and demand information [across suppliers] with a higher velocity, collaborating with tools in close to real time,” she says.From information sharing, Gamboni envisions pooling more logistics resources to increase equipment utilisation.

Collaboration is easier said than done, she admits, with competition and internal focus often preventing companies from discussing such potential. However, it is not insurmountable. Compared to automotive, Gamboni observed an even stronger resistance among FMCG competitors to communicate, let alone share resources. “You couldn’t mention the competitor,” she says. “Even having the same supplier as your competitor was virtually a crime.”

For these companies, there is no compromise on getting products to market. For automotive, while competition is also fierce, she sees more room to share, whether initiated by integrators like Gefco, or neutral third parties like universities or associations.

“For automotive, getting to market is important as well, but I don’t think people buy one car over another because of the supply chain director. We should be open to working together.”