Russian carmakers are making efforts to resume production at plants in Kaliningrad and Moscow from complete knockdown kits (CKDs) imported from China. 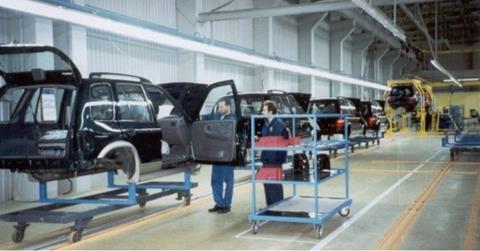 According to Anton Alikhanov, governor of Kaliningrad region, Avtotor has signed a contract manufacturing agreement for vehicle assembly with three Chinese carmakers, though he did not specify which companies they were. Valery Gorbunov, chairman of the board of Avtotor, explained that the company would not name its partners to avoid putting them at risk of secondary sanctions.

Prior to Russia’s invasion of Ukraine, Avtotor assembled vehicles for BMW, Hyundai and Kia at the Kaliningrad plant. That contract work is currently suspended with now clear view of when or if it will resume.

China dominates market
At the Moskvitch plant, which previously built Renault vehicles, operations resumed on November 23 and by the end of 2022 the plant will be making the Moskvitch-3 and the Moskvitch-3e, another JAC copy, this one of the iEVs4. By that time the nationalised plant expects to make 600 vehicles of which 200 will be EVs. The company said that in two years production is projected to grow to 120,000 vehicles, of which 20,000 will be electric.

Russian carmaker Avtovaz also harbours a plan to begin production of new Lada models at its plant in St Peterburg, previously operated by Nissan. Local newspaper Fontanka disclosed that the new Lada models would also be copies of Chinese vehicles, citing sources in the regional government. The publication said that this was the only choice available to the company at that moment. However, AvtoVaz has not secured any agreements with carmakers in China.

As of early December 2022, there were only 16 automotive brands on the Russian market, compared to 60 in the previous year, according to the Russian association of automotive dealers. Aside from three Russian brands, Lada, GAZ and UAZ, all other brands are Chinese. Chinese brands account for 78% of the market.

Those Chinese carmakers will have little or no interest in Russian automotive components, which makes the Russian suppliers’ future rather grim. Andrey Kraini, general director of the Automotive Industry Cluster, said they needed rescuing, especially given the billions in investment pumped into the sector to localise component production when western carmakers pulled out of Russia following the invasion of Ukraine. The current crisis has jeopardised those investments.

However, Russian parts makers are busy supplying spare parts to the aftermarket and, according to Kraini, there are discussions underway for the supply of parts to Uzbek carmakers ADM Jizzakh and UzAuto.