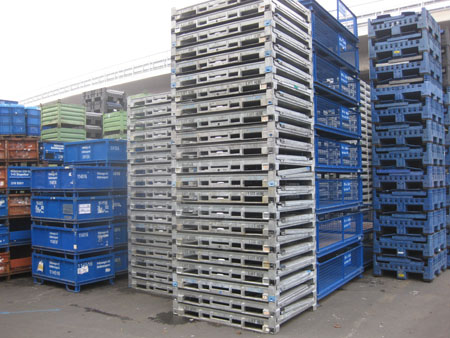 One prominent example of a tier one supplier using reusable containers for its overseas shipments is Linde + Wiemann, a supplier of body frame parts, seats, and instrument panels based in Dillenburg, Germany

One prominent example of a tier one supplier using reusable containers for its overseas shipments is Linde + Wiemann,a supplier of body frame parts, seats, and instrument panels based in Dillenburg, Germany.

A couple of years ago, Linde + Wiemann was searching for an alternative to cardboard boxes for its overseas shipments of single components for body-in-white parts, such as front ends, rocker panels and doors. Thomas Osthoff, international project manager, says the aim was to reduce packaging costs, maximise the capacity of 40ft ocean containers, avoid damage and improve handling at overseas plants.

Linde + Wiemann found a solution in the MB5 container from Goodpack, which has replaced the supplier’s one-way packaging for body parts, particularly for serving Mercedes-Benz production of the C-Class model series in Germany, the US, South Africa and China.

The MB5 is a metal container with a standard footprint that fits across industries. It is 1.465 metres long, 1.15 metres wide and 1.09 metres high, including an extension for use in high-cube sea containers. The MB5 has a removable door on one side and the other side folds halfway across for easier access.

MB5 container orders come from Linde + Wiemann’s Dillenburg plant, as well as its tier one suppliers. Goodpack provides the required quantities of MB5 containers to Linde + Weimann’s suppliers in Europe, including Daimler parts collected from Hamburg, Bremen and Dingolfing (near Munich). The Daimler parts are consolidated in Stuttgart where third party logistics providers DB Schenker or Kuehne + Nagel pack them into MB5 containers. Other parts also move to Linde + Wiemann’s warehouse in Hamburg to be packed into MB5s, before onward shipping.

For Daimler, shipments to South Africa and the US move directly to the plants, which contain warehouses. In China, Linde + Wiemann uses an outside storage area, from which it moves parts just-in-time to the production line. Linde + Wiemann also supplies Mercedes-Benz from its local plants in each region. Goodpack ultimately picks up the empty containers at the overseas destinations. 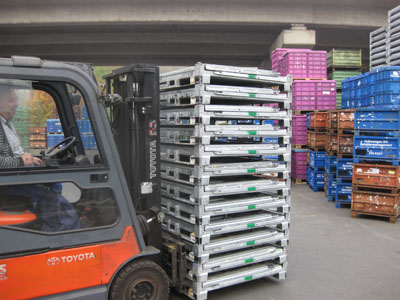 Goodpack's MB5 containers have replaced one-way packaging for body parts sent by Linde + Weimann to Mercedes-Benz production locations in Germany, the US, South Africa and China

Colin Howard, sales director for automotive at Goodpack, says the company uses RFID technology to scan each bin at its depot in Maastricht, in the Netherlands, and links the data to a container delivery order.

Goodpack begins tracking each container as soon as it leaves the packing location in Europe. “When Linde + Wiemann ships its product, it sends us a shipment confirmation signal, which populates our system and identifies to our planners where the MB5 is being sent,” explains Howard. “At this stage, we invoice the end user. When the MB5 is empty, the end user sends a de-hire signal and the rental time is stopped. Upon return to our depot, we scan the MB5 again using the RFID tag.”

Goodpack provides reports that show the number of usage days at the packer and between-shipment confirmations and de-hire. Howard says this information is now becoming available to its customers on Goodpack’s web-based system. He adds that its RFID programme has improved accuracy, removed manual tasks and reduced the risk of errant MB5s as it tracks serial numbers between the packer and the end user.

Linde + Wiemann has addressed a number of packaging challenges by switching to the MB5 container. Previously, it encountered challenges such as damaged packaging following transport, difficultly in handling and storage overseas, and the need for multiple types of packaging.

“The cardboard boxes required a lot of handling and the cardboard would become wet and damaged,” explains Osthoff. “Particularly in China, high humidity could be a problem. We could stack the cardboard only three high in the warehouse. By contrast, we can stack the MB5 containers five high.” 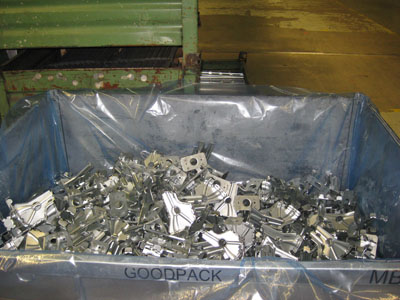 Linde + Wiemann uses the MB5 container for around 90% of its single components from Europe. Reasons for not using them may be because the parts are too big or the required monthly volume of MB5 containers is not high enough to justify the cost.

Although the MB5 container works well for Linde + Wiemann, its effectiveness in China depends on a number of factors, including ocean transit time and the inventory level of the components being shipped. “Customs clearance in China takes one week to complete, which affects our costs. We pay for a specific rental period [for MB5s] or [pay] extra if it goes past the period,” says Osthoff.

When shipped overseas, reusable containers may also be used in the destination country. For example, Linde + Wiemann is considering using the MB5 for domestic transport, such as from a supplier in south China more than 2,000km to its plant near Beijing, instead of its own returnable packaging or one-way cardboard boxes.

Linde + Wiemann demonstrates the advantage of shipping reusable containers overseas to improve its packaging efficiency. Its partnership with Goodpack is a prime example of how a reusable packaging provider can add significant value in overseas logistics by removing cardboard and coordinating flows with other industries.