Mercedes-Benz to produce batteries in Poland 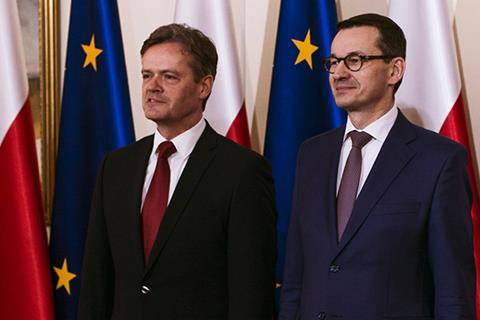 Mercedes-Benz Cars is to build a lithium-ion battery factory in Jawor, Poland, at the same site where the German OEM is building its new engine plant.

The new unit will be equipped with cutting-edge technologies and designed for series production of EQ brand batteries, starting early next decade. Around 300 new jobs will be created in what will be the company’s ninth battery plant worldwide.

The carmaker is also building a new battery factory in Kamenz, Germany, where it has been making batteries at an existing factory since 2012. There are also two German battery factories planned for Untertürkheim and one planned for Sindelfingen. At the same time, Daimler is building a joint venture battery plant with BAIC in China at Yizhuang Industrial Park and has started construction on one at the Tuscaloosa plant in the US. Finally, there is another battery plant currently being built in Bangkok, Thailand, with local partner Thonburi Automotive Assembly Plan.

Linking in with its €1 billion-plus plans to create an in-house global battery production network, parent company Daimler is also investing more than €20 billion ($22.5 billion) in buying battery cells on the world market made to its own particular specifications to secure the best possible technology.

“We will produce batteries on our own, which we consider a significant success factor in the era of electric mobility,” said Markus Schäfer, Mercedes-Benz Cars divisional board member with responsibility for production and supply chain.

The battery factory in Jawor will supply batteries primarily for the Mercedes-Benz assembly plants in Europe. The company said the capacity expansion in Poland reflected its increasingly international orientation for its powertrain production network and that its battery facilities primarily served the local markets in which they were located.

Making lithium batteries closer to the assembly facilities in which they will be fitted makes sense for various reasons. A spokesperson for Mercedes-Benz said these included the fact that lithium-ion cells and batteries were subject to dangerous goods regulations, which included national and international carrier-specific restrictions on the transport of batteries by road, sea and air. These regulations are constantly being adapted as the technology develops and apply to both batteries and their packaging.

At Jawor, around 100km from the German border, the company is already constructing a state-of-the-art factory for €500m to produce four-cylinder engines for hybrid and conventional vehicles.

Polish prime minister Mateusz Morawiecki said: “The decision of Mercedes-Benz Cars to start the production of electric batteries for a new type of vehicle in Jawor shows that companies that have started operations in our country positively assess the investment climate and want to continue to grow here.

“We are witnessing the fourth industrial revolution in which Poland plays a leading role. We are glad that in Jawor will be produced not only traditional engines, but also the hearts of cars of the future, namely electric batteries.”

Mercedes-Benz Cars plans to have electrified its complete portfolio by 2022, including producing more than ten pure-electric models.