VW Group has officially opened a global packaging centre in the German port of Wilhelmshaven. The facility will be managed by Imperial Logistics, which will package parts to more than 30 international factories for VW Group brands, including Audi (which is the main tenant), Volkswagen and Volkswagen Commercial Vehicles. The parts and components are installed in about 50 different vehicle models. 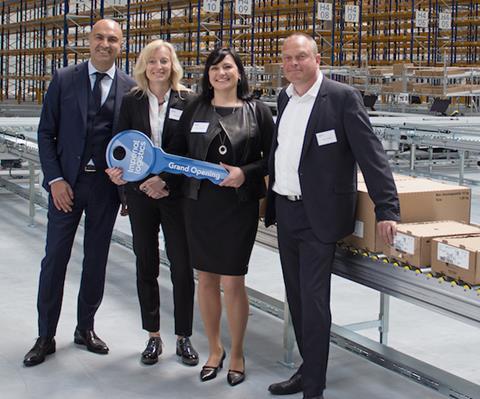 “By integrating the packaging centre in Wilhelmshaven, we have optimised our supply network, thus reducing the logistics costs for supplying the plants overseas,” said Astrid Lühring, member of the board of management for Volkswagen Group Logistics.

The facility is directly connected to Jade-Weser-Port in Wilhelmshaven, which is the only deep-water port in Germany. This is a forward-looking strategy for the carmaker as it will allow VW Group to load material on the largest ocean-going vessels at a time when those vessels are increasing in size.

According to the carmaker it is supplying 7,000 different parts, including headlights, steering wheels and audio systems, from the Wilhelmshaven facility to overseas plants in 13 countries, including in North, Central and South America, Africa, China, India, Indonesia, Malaysia and Russia. The parts are supplied by purchasing and production parts suppliers who also supply the vehicle plants in Europe in the same way.

The carmaker has packaging centres in nine other locations in Germany, as well as at the Seat Martorell site in Spain (see table). That brings the total number of part lines exported to 15,000. The parts are supplied by purchasing and production parts suppliers who also supply the vehicle plants in Europe in the same way. The shipping volume is approximately 92,000 TEU containers per year.

VW is leasing the building from property developer, Panattoni Europe, which was in charge of the build of the facility and employed Goldbeck International to construct it. Work began in June 2018 on a total area of 100,000 sq.m. Goldbeck finished the first of four main halls in February this year. At the end of March 2019, the entire logistics centre was handed over to Audi and Imperial Logistics began operations immediately.

Around 200 representatives of local and state government, senior management of Volkswagen Group and Imperial Logistics, along with service partners and others, attended the grand opening on May 15.