Packing a punch in Mexico 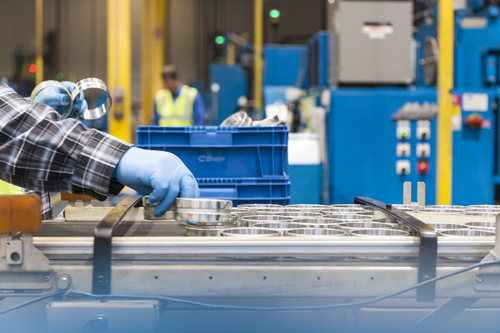 Mexico’s rise is bringing growth in packaging supply and solutions, but a lack of standards could put supply chain efficiency at risk.

Mexico is one of the hottest countries for automotive production growth right now, and the staggering increase of automotive production in the country has touched every aspect of the supply chain. This of course includes packaging. More than half of containers in use in Mexico are returnable, but increasing this percentage is a priority among many carmakers and tier suppliers. Establishing standardisation within Mexico and around the world, improving system management including tracking technology, pooling options, and the obvious benefits of better quality containers are also concerns for improving packaging costs and operations.

Throughout Mexico and the US, a number of trends appear to be emerging. Companies are switching from bulk containers to smaller, handheld boxes. Although OEMs used to hold a week’s worth of inventory, it is now more common to hold closer to one day, meaning that smaller containers can now be used. Meanwhile, with the growth of vehicle sales in Mexico, the space saving is particularly important. For further space savings, the use of folding containers is even more effective, reducing freight, handling and storage costs.

The use of collapsible or nesting containers is also critical for long transport loops between the US and Mexico, or Mexico and Canada, explains David McCulloch, vice-president and managing director for the packaging systems division at Schaefer Systems International – a company that manufacturers straight-wall and collapsible reusable containers, top caps, bulk containers, protective dunnage, and pallets.

During the past two years, Schaefer has introduced collapsible products to cube trailers in North America that meet both AIAG and NAFTA guidelines. These include its CF handheld collapsible container, which offers a 3:1 or 4:1 return ratio, and up to 75% freight savings, according to McCullough. He adds that the container is gaining greater momentum for longer loops. The containers used between the United States, Mexico, and Canada, which have a 48-inch by 45-inch footprint (122cm by 114cm), are traditionally made to cube out a 53-ft tractor-trailer in North America. These container systems are mainly effective for North America, however, as they may not cube out a 40ft sea container (which also the standard for European trucks) enough to justify their use.

A worrying lack of standards

Across the global industry there are gaps in packaging standards, and Mexico is no exception. McCullough points out that several companies have introduced unique containers that fit neither German VDA, nor North American AIAG standards. “There is more of a global type footprint out of Asia. We predict a shift to a true global standard within the next five to ten years as more parts and products move between countries and continents by sea,” he says. “This trend will also force a shift in the trailers used over the roadways.”

Containers that ship from Mexico to Europe, Asia, and South America typically have metric dimensions that fit the volume of a sea container, which improves their efficiency. Containers used between Europe and Mexico mainly follow a metric standard of 1,200mm by 1,000mm or 1,200mm by 800mm that fits European trailers as well as sea containers. 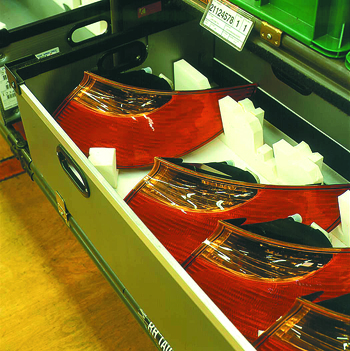 Within Mexico itself, however, many Mexican suppliers are still not using standardised containers, including some tier ones, but even more tier twos and threes, according to Eduardo Rincon, sales director for Orbis Mexico, a major packaging supplier. Standardisation becomes even more important for shipments between North America and Europe, Asia, and South America. “OEMs are growing globally, but packaging is not keeping up,” says Rincon. “We need faster progress. In the past, Mexico was serving North American OEMs, but now they serve them worldwide.”

Cummins Filtration Mexico faces a similar challenge in a lack of standards both between the US and Mexico and globally. “With the need to standardise packaging in order to reduce costs, the future will focus more on flows between the US and Mexico. We also want to test returnables with overseas suppliers in China and Korea in the near future,” says Pedro Anaya Estrada, supply chain director at the tier supplier.

For its shipments from the US to Mexico, Cummins uses bulk collapsible containers as well as plastic returnable containers for chemicals. It exports the empties to the US and imports containers and materials using milkruns.

Cummins’ inbound network uses bulk collapsible returnable containers as well as straight-wall StakPak containers. “For domestic shipments, 60-70% of our containers are returnable at this point. Our goal is to reach 100% this year,” says Anaya.

The big move to Mexico

Bradford Company, which operates a production plant near Monterrey, Mexico, offers different products for domestic Mexican plants compared to those in the US and Canada. In the US, packaging may need to withstand a broad temperature range, with containers including check gauges to monitor quality. And in Mexico, designs must consider extreme environmental conditions such as high ultraviolet rays – which damage containers and reduce durability.

As Mexico’s automotive production grows, more packaging manufacturers are opening plants. The most recent was Orbis Corporation, which now operates 11 plants in North America. In February, Orbis opened its newest manufacturing facility in Silao, 250 miles (400km) north-west of Mexico City. In addition to increasing local sourcing, the 265,000 sq.ft (24,600 sq.m) plant also enables Orbis to be more responsive to its growing customer base in Latin America.

The new plant is the first Orbis facility to offer injection and structural foam moulding, as well as dunnage fabrication under one roof. It manufactures plastic containers, pallets, BulkPak containers, and its ORBIShield dunnage products. The company has also introduced a new line of fabric dunnage to protect Class A (visible) surfaces, in addition to the corrugated plastic divider sets, foam and fabric products it already offers.Within its local network, Orbis has been providing its reusable packaging management (RPM) service for Nissan’s second Aguascalientes plant (A2) since it opened in November 2013, at an offsite warehouse. Primarily, Orbis provides container staging and some repacking. According to Rincon, the company aims to maximise the number of parts per container and the number of containers per vehicle.

Orbis offers the same containers in the US and Mexico. “The nearby packaging plant eliminates border crossings for ordering containers. The ability to order from Silao means a transportation lead-time of 1.5 hours instead of the three or four days required to ship from our plant in Urbana, Ohio,” says Bob Petersen, marketing manager for industrial at Orbis Corporation.

As packaging systems become more efficient in Mexico, one of the growth areas is pooled container solutions. Chep offers this for shipping both within Mexico, and between Mexico and the US. One of its pooling models is to manage Chep-owned containers for OEMs and their suppliers, while also providing a management service for OEM-owned packaging to ensure the security of supply, minimise losses, and lower costs. 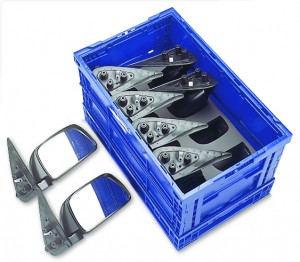 This service includes the use of improved technology for container tracking. Kevin van Dyk, customer service manager, automotive and industrial solutions at Chep, says the company is currently conducting an RFID technology trial for tracking shipments of oil pans on returnable trays. Orbis has developments in this area too, and uses RFID technology to monitor container movement. Without using tracking technology for containers, there is often loss through theft, or simply loss through not knowing a container’s location. Attrition is currently at about 5% annually, with more issues on longer routes, such as shipping from the Midwest to El Paso, Texas and then on to Mexico.

Among its recent developments, Cummins has a project underway to track its containers. “The model systematically controls our container inventory. It signals the containers’ locations, quantity, size, damage, etc.,” says Anaya. “We estimate implementing it in the second quarter of this year. Currently, we ask our suppliers to count the containers, so the system is still manual.”

XPO Logistics, among other logistics services, provides container management, new rack delivery, and tracking for OEM customers. The company is seeing its fastest growth in Mexico during the early-stages of container management, such as planning around rack fabrication and delivery. Willard Johnston, assistant vice-president for operations at the company, believes that each touch point for domestic container control has the potential to improve costs in a long supply chain. In particular, he points to the need for proper labelling, tight process control, correct paperwork for cross-border moves, system integrity, and robust carrier management to support targeted transits, particularly considering the extended distances that may be involved in Mexico.

The 3PL provider also monitors key performance indicators and other metrics that keep score of container control. Johnston says that it is seeing good control metrics for OEM shipments to in-country Mexico suppliers. This establishes active management of the process, with visibility and accountability built into each link of the container supply chain. “Standardisation and limited container pooling might work better in Mexico than elsewhere, particularly near the border. With strict customs rules, containers can get held up needlessly,” observes Johnston. 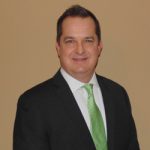 "Standardisation and limited container pooling might work better in Mexico than elsewhere, particularly near the border. With strict customs rules, containers can get held up needlessly" - Willard Johnston, XPO Logistics

Tom Kroswek, senior director of supply chain excellence, and value stream leader for automotive at Ryder’s Global Supply Chain Solutions division, says that pooling opportunities have been growing and will continue to grow – particularly with the increase of Asian and European OEMs in Mexico. “Pooling is most advisable for shipments between the US and Mexico as opposed to intra-Mexico ones. The number of containers needed depends on the loop size, lead time, expected usage, consumption rate and how they are integrated into the supply chain,” he says. However, there are challenges. Shipping dunnage back to the supplier, tracking containers, and the dunnage used by different OEMs can all make pooling particularly difficult.

Some of the challenges faced in Mexico are common across the whole of the automotive industry. “Too often, the manufacturer’s packaging and logistics functions are in different departments that use different performance metrics. In order to achieve the best value, the automotive shipper needs to understand all of the cost components, including freight, handling, storage, ergonomic concerns, and end-of-life residual value,” says Bradford.

As ever, customs regulations are a constant challenge. However, under Mexico’s IMMEX programme, some goods that are processed for subsequent export can be temporarily imported without having to pay taxes or duties – including containers. According to van Dyk, Chep offers pools of temporarily imported containers for Mexico’s cross-border shipments that meet IMMEX requirements. Chep is currently in negotiations with a 3PL in Mexico and if the agreement comes through, more customers will be able to pool their containers in Mexico, he adds. 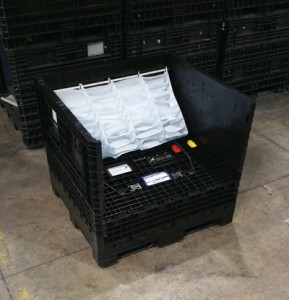 Johnston from XPO Logistics says that the company’s critical objective is to assess the full material flow and achieve the lowest total landed cost. Other key considerations are in-plant limitations as to the size and type of container or rack. “Ergonomics and material handling restrictions, for example, might require a small lot container in exchange for a higher-pack quantity knockdown standard bin,” he says. “The longer the supply line or length of haul, the more important part-pack density and maximising quantity per load become the key cost drivers.”

Mexico’s role in the automotive supply chain is becoming increasingly global; with it, packaging needs to become more global, too. It is increasingly a burden to have different packaging in every country, with no cohesion whatsoever, although it is still common in Mexico as in many countries. Companies are working to get costs down, standardise, and have better quality management, but there is a way to go if they wish to continue to make gains on their logistics competitiveness.