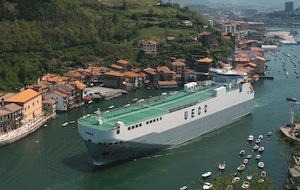 The northern Spanish port of Pasaia (Pasajes) has begun handling imported Honda vehicles from the UK. The first consignment of almost 100 units arrived on board the car carrier Autostar on 13th January, operated by UECC. The vehicles were shipped from the port of Southampton. However, they were not bound for Spanish distributors, but rather for the market in neighbouring France.

Forecasts suggest that around 2,000 Honda units will be channelled through Pasajes during 2016 en route for France though a spokesperson for Honda said that volumes would be dependent on dealer orders. The carmaker is shipping Civic and CR-V vehicles through the port for dealers in southern France.

The contract is significant in that it is the first time that UECC has conveyed Honda cars on this route and also because Pasajes has not acted as a trans-shipment hub of this type before, serving the southern French market.

UECC operates its own terminal at Pasajes and its primary growth is at ports located on the north Spanish coast, which along with Pasajes include Vigo and Santander.