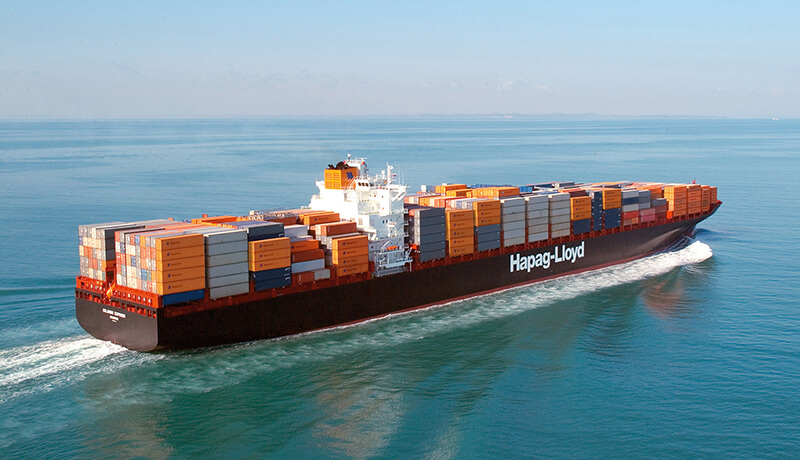 The end of a longstanding conflict in the Horn of Africa is set to create new pathways into one of the potentially richest automotive markets in the continent; after two decades, Eritrea and Ethiopia have concluded a conflict that has cost hundreds of thousands of lives. The catalyst for peace finally came in March this year, when Ethiopia ushered in a new prime minister, the youthful and energetic Abiy Ahmed.

Peace brings with it an end to Ethiopia’s previously intractable logistics challenge; as a land-locked country, it had become dependent on the enclave of Djibouti for 95% of its imports and exports. Now, Ethiopia and Eritrea are quickly expanding border links that will give Addis Ababa multiple routes to the Red Sea.

"What is happening in Ethiopia right now could be one of the most significant shifts in government policy that this region has seen for decades," says Christopher Hockey, head of information at WS Insight, a Mauritius-based, Africa-focused security company.

The ending of hostilities has also made it possible for Ethiopia to reach across the border to former rival Somalia. Since taking office, Ahmed has signed at least four port agreements with the Somali government in Mogadishu as well as with the autonomous enclave of Somaliland.

“The significance of an improved relationship with Eritrea is self-evident; recent talks with Somalia are also extremely important,” Hockey notes.

"What is happening in Ethiopia right now could be one of the most significant shifts in government policy that this region has seen for decades." - Christopher Hockey, WS Insight

Ethiopia is a tantalising market for automotive exporters. It is one of the world’s fastest growing economies, with consistent annual growth in gross domestic product (GDP) of more than 10% over the past decade, according to the World Bank. In the next five years, it will become only the third African country with annual economic activity of more than $100 billion a year, after Nigeria and South Africa.

With a population of 100m people – the second largest in Africa – it has the potential to grow into a substantial automotive market.

The new government also wants to reform an economy which is heavily dependent on agriculture and struggling with an ongoing shortage of foreign currency. In spite of the high economic growth rate, there is the ever-present risk that a single disruption, such as drought, could destroy growth, particularly in its all-important farming sector, which counts for up to 45% of GDP, according to the World Bank.

"We are the fastest-growing economy in Africa, but we cannot hope to keep this up if we only depend on agriculture," said Motuma Mekassa, defence minister of Ethiopia, speaking to Automotive Logistics on the sidelines of a symposium in Cape Town earlier this year.

[mpu_ad]Mekassa said the country had begun setting itself up to become a modern, diverse economy. In 2016 alone, Ethiopia invested more than $2 billion in new roads.

Already, there are signs that the current level of growth cannot be sustained. According to a World Bank assessment in June, Ethiopia’s GDP growth rate will decrease by 1.3% in the current fiscal year. To recover this economic growth, the country needs to speed up non-farming investment. Ethiopia has already begun doing so.

In the decade prior to Ahmed becoming prime minister, Ethiopia had begun building power stations and laying railway infrastructure.

"By developing our natural resources, we believe our economy will keep growing and that by 2025, we will be a middle-income economy," Mekassa said.

Expanding logistics optionsAt present, cargo traffic to and from Ethiopia is cleared through the Doreleh Container Terminal in Djibouti, which opened in 2009. The facility can manage 1.25m twenty-foot-equivalent (TEU) containers and has eight super post-panamax cranes.

Djibouti is also working on another port terminal that would boast an annual capacity of 2.4m TEU. Subsequent expansions would bring that up to 4m.

While high-end vehicle exporters frequently make use of containers, most regular vehicle shippers use roll-on, roll-off vessels, typically offloading cars at Doreleh before transferring them to trucks for the journey south to the Ethiopian border. 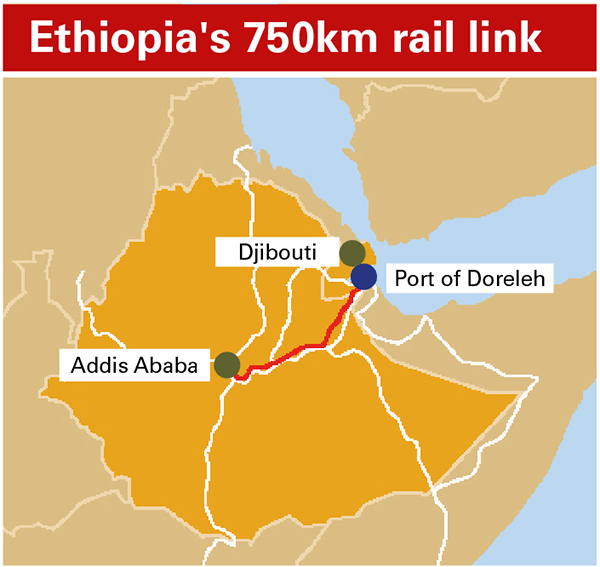 Rail freight is also now an option. In late 2017, a new rail link between Addis Ababa and Djibouti was opened. It runs for 750km and is built to standard gauge, in contrast to the old metre-gauge line built by the Italians during their occupation of the country in the early part of the 20th century. Standard gauge allows for greater speed; the train covers the distance in eight to ten hours, as opposed to a journey by road which can take up to three days. The line terminates at the port of Doreleh itself, easing loading and unloading of cargo.

The current capacity of the rail line is just under 30m tonnes annually, although this will increase as capacity expansion at Doreleh boosts the terminal’s cargo handling capacity.

There is, however, a wrinkle in Doreleh’s future. In February this year, the Djibouti government, under president Ismael Omar Gueleh, took control of the facility from its developer-owner, United Arab Emirates port operator DP World.

DP World signed a 30-year lease on Doreleh in 2006 and spent billions of dollars developing it into an international standard container facility. By 2014, the port was booming and Gueleh’s administration began wondering if they had given DP World a deal that was too good. Ongoing talks between the two led to nothing and Doreleh was effectively nationalised this year.

Since then, the UAE has moved swiftly to retaliate, pledging to develop rival ports around the Horn of Africa.

The Ethiopian vehicle market is growing at 14% a year, according to the Ethiopian Transport Authority (ETA). The country had just 831,265 registered vehicles by the end of fiscal year 2016/2017, leaving plenty of room for growth.

Almost all the vehicles are imported, with 120,000 landing in the last fiscal year. Most are used cars from Japan, with some from Europe and China.

The ETA is attempting to keep older, technically unfit vehicles off the road and is expanding its supervisory capacity. It is also looking to put a cap on the age of cars that can be imported.

Ethiopia currently produces just over 8,000 commercial and private vehicles a year for the local market – a tiny number that is well below the country's potential. A handful of car assembly plants are run by OEMs including Kia Motors, which has a joint venture plant outside Addis Ababa with local vehicle retail firm Belayab Motors, with a capacity of 3,000 vehicles a year. Peugeot, meanwhile, has a small assembly plant that puts out 1,200 cars a year across three models. Geely, FAW, BYD and Lifan account for four further plants producing a combined total of 4,000 cars a year.

Imported cars dominate the market, however, and around 85% of vehicles on the roads are secondhand. About 90% of these are Toyotas imported from Japan, according to a Deloitte Africa automotive study.

Yet the high level of import tax and rapid growth in consumer demand mean that local production is likely to increase. Ethiopia even has its own annual automotive show, Autoexpo Africa, which will next be held in Addis Ababa in November.

Djibouti’s case received a severe blow in August when the London Court of International Arbitration stated that its seizure of Doreleh Container Terminal was illegal. The ruling will hurt Djibouti’s international standing and amplify questions about its reliability as an investment destination. The finding will also boost DP World’s principal shareholder, the UAE government, in the financing of rival ports in the region.

“The UAE has carefully positioned itself as a partner to many countries in the Horn of Africa, including Ethiopia, Eritrea and Somaliland,” says Kelsey Lilley, associate director of the Atlantic Council’s Africa Center. “The future of its relationship with Djibouti, however, remains to be seen, depending on resolution of the DP World-Doraleh Container Terminal dispute.”

Indeed, Djibouti is the “big loser” in the swiftly changing politics of the region, notes Lilley. The enclave has gone from being the only major port on nearly 7,000km of East African coastline to competing with half a dozen potential rivals in the next few years.

“Djibouti has been the long-time beneficiary of Eritrea’s isolation and it has essentially been Ethiopia’s only port option,” Lilley notes. “As Ethiopia warms to Eritrea and has the opportunity to use the latter’s multiple ports, Djibouti will need to re-calibrate its business model.”

Djibouti will have to adapt fast, however. In July, the UAE pledged $10 billion to Ethiopia and Eritrea, much of it for alternative port infrastructure. 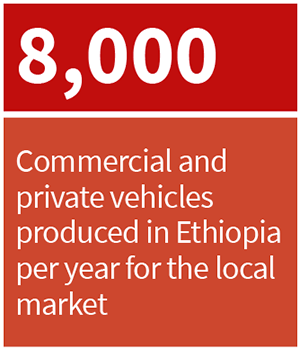 Bypassing Djibouti in futureFor now, at least, it does not appear that vehicle shippers are planning any quick transition to alternative ports. Bilal Abasi, a spokesperson for SBT Japan, which describes itself as the largest mover of used vehicles to Africa from Asia, says that for now at least, it is still business as usual.

“We do not expect to send vehicles to East Africa using new ports because we have established lines for these places already,” says Abasi. “We use the best price routes and these save customers money, so we will not change unless there are more savings.”

This is not necessarily good news for Djibouti, because while it may enjoy an entrenched position with existing customers, new entrants are likely to look elsewhere.

The enclave is heavily dependent on Ethiopia as its prime customer and there is little transhipment opportunity beyond Addis Ababa. To the west, South Sudan is still struggling to recover from civil war, while North Sudan is under UN sanctions. This leaves the Great Lakes region further south, but this is a long haul overland from Djibouti and better served by Kenyan and Tanzanian ports.

As it is, new routes being added by shippers so far appear to be bypassing Djibouti in favour of ports further south. Recently, Hapag-Lloyd said its newly-launched route between the Arabian Gulf and East Africa would soon expand with Kenya as the focus. Growth of 6% annually puts the region at the top of the African continent, and it makes sense for the company to service ports that are investing heavily in infrastructure.

[related_topics align="right" border="yes"]In April, Hapag-Lloyd began its first dedicated East Africa service, which goes from the Saudi Arabian port of Jeddah to Mombasa in Kenya, and from there to Dar es Salaam in Tanzania, before returning directly to Jeddah.

“I am delighted that our East Africa service from and to Kenya is developing so positively," says Dheeraj Bhatia, MD Africa, Middle East and Indian subcontinent for Hapag-Lloyd. “After only four months in operation, we have significantly expanded our business, with overall vessel utilisation beyond our expectations.”

Significantly, however, the route bypasses Djibouti. This is probably because many of Hapag-Lloyd’s shipments are headed to central and southern Africa, including Lubumbashi in the Democratic Republic of Congo; Burundi; Rwanda; and Uganda. Mombasa and Dar es Salaam are far better for serving these inland destinations than any ports further north.

Will the peace last?For alternative routes to be established to the African interior, the Eritrea-Ethiopia peace accord will have to hold. So far, it appears that both parties want it to do so. Ethiopia’s Ahmed has faced political pushback within the ruling Ethiopian People's Revolutionary Democratic Front coalition, but for now, at least, his office appears secure.

"Ahmed has been able to announce these reforms because of the changing dynamics within the ruling coalition," explains Barnaby Fletcher, senior analyst Southern Africa at specialist global risk consultancy, Control Risks. "Many of the seemingly dramatic reforms announced by Ahmed are little more than obvious solutions to the challenges Ethiopia is facing."

"Many of the seemingly dramatic reforms announced by Ahmed are little more than obvious solutions to the challenges Ethiopia is facing." - Barnaby Fletcher, Control Risks