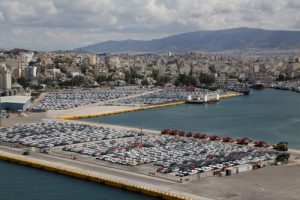 The Greek port of Piraeus is increasing the amount it charges for finished vehicle handling by more than 34% in a move that has taken those loading and unloading vehicles there by surprise. According to the current schedule, rates for a car under 3 tonnes are increasing from €33.92 ($41.8) to €40.70 ($50.2). The port authority is also introducing a new ISPS charge of €4.80 to cover security and safety costs. The charges apply to vehicles being imported for onward transport by land.

Piraeus Port Authority (PPA) reported an increase in vehicle volumes through the port’s car terminal of more than 19% last year, with a total of around 431,160 cars handled compared to just more than 361,900 in 2016. Most of them were transhipped to other ports in the Mediterranean, with 331,832 moved that way in 2017, an increase of more than 22% on the previous year, according to figures provided by the PPA.

The authority, which is majority owned by Shanghai Communications Technology Development (the owner of shipping line Cosco), said the port was becoming one of the biggest terminals for finished vehicle traffic across the Mediterranean.

"Our target is the further increase of throughput at the car terminal through the expansion of existing infrastructure and the upgrade of our services,” said the chairman and CEO of PPA, Captain Fu Chengqiu. That expansion is part of a ‘master plan’ to invest €500m ($620m) in a wider development that also involves the container and cruise terminals. That plan runs to 2021.

Whether the increase in costs levied on imported cars is aimed at investing in the infrastructure to support this growth is unclear, but the increase in fees, which will be brought in shortly, has drawn protest from ro-ro operators calling at the port.

“Unfortunately, this looks like a decision careless of many operators’ and clients’ interests,” said Costantino Baldissara, commercial, logistics and operations director at Grimaldi Group, which uses the port for vehicle moves. “[This notification] came out with a very short pre-announcement and affects all the finished vehicle logistics world.”

The move is reminiscent of fee increases seen when the Turkish port of Derince was privatised back in 2015, though the size of the rate increase seen in Piraeus is dwarfed by comparison with the 450% rise imposed back then by Safi Katı Yakıt Sanayi, Ticaret.

Nevertheless, the cost of the increase at Piraeus is expected to be something ultimately passed on to OEM customers. Baldissara said that in defending its clients’ interests, Grimaldi had sent a formal letter of protest and was considering “all available solutions” to give its customers the most efficient service.

In other news, the PPA has recently signed a contract with Huawei Technologies for the modernisation of its IT network infrastructure in Greece. Huawei is designing the new network as well as supplying and installing the required equipment, including internet routers, firewall protection and switches, and providing transition services.